ATG Article of the Week: Queens Has a Striking New Library. Why Can’t the City Build More Gems Like This?

ATG Article of the Week: Queens Has a Striking New Library. Why Can’t the City Build More Gems Like This?

Queens Has a Striking New Library. Why Can’t the City Build More Gems Like This? 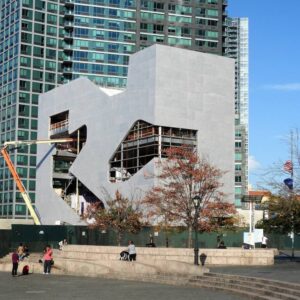 According to Michael Kimmelman, the architecture critic of The New York Times, “the Hunters Point Community Library is one of the finest public buildings New York has produced this century. But it cost more than $40 million, took a decade and almost died.”

And he goes on to write “Against a phalanx of mostly dreary new apartment towers, the soon-to-open Hunters Point Community Library by Steven Holl Architects is a diva parading along the East River in Queens, south of the famous Pepsi sign. With its sculptured geometry — a playful advertisement for itself — it’s even a little like the Pepsi sign.

Compact, at 22,000 square feet and 82 feet high, the library is among the finest and most uplifting public buildings New York has produced so far this century.

It also cost something north of $40 million and took forever to complete. So it raises the question: Why can’t New York build more things like this, faster and cheaper?

Opening Sept. 24, Hunters Point is surely what Queens Library officials and the borough’s former president, Helen M. Marshall, had in mind when the project was proposed more than 15 years ago: a crown jewel among Queens branches, at a singular, symbolic spot facing the United Nations and Louis Kahn’s exalted Four Freedoms Park across the water.

On dark days and evenings, its enormous, eccentric windows will act like inviting beacons of light, attracting eyes and feet. They carve whimsical jigsaw puzzle pieces out of a cool, silvered-concrete facade.

That facade is a load-bearing structure, allowing the library’s liberated interior to spiral some 60 feet upward and outward from a shallow canyon-like lobby, unfolding in elevation as a sequence of tiered desks, book stacks and social spaces. The inside is mostly warm bamboo, with spectacular views…”