ATG Book of the Week: Working

Book of the Week | Blog Posts

ATG Book of the Week: Working 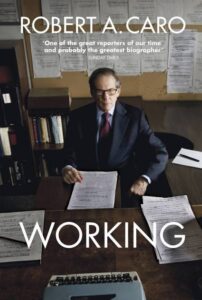 From the two-time Pulitzer Prize-winning author of The Power Broker and The Years of Lyndon Johnson: an unprecedented gathering of vivid, candid, deeply revealing recollections about his experiences researching and writing his acclaimed books

For the first time in book form, Robert Caro gives us a glimpse into his own life and work in these evocatively written, personal pieces. He describes what it was like to interview the mighty Robert Moses; what it felt like to begin discovering the extent of the political power Moses wielded; the combination of discouragement and exhilaration he felt confronting the vast holdings of the Lyndon B. Johnson Library in Austin, Texas; his encounters with witnesses, including longtime residents wrenchingly displaced by the construction of Moses’ Cross-Bronx Expressway and Lady Bird Johnson acknowledging the beauty and influence of one of LBJ’s mistresses. He gratefully remembers how, after years of working in solitude, he found a writers’ community at the New York Public Library, and details the ways he goes about planning and composing his books.
Caro recalls the moments at which he came to understand that he wanted to write not just about the men who wielded power but about the people and the politics that were shaped by that power. And he talks about the importance to him of the writing itself, of how he tries to infuse it with a sense of place and mood to bring characters and situations to life on the page. Taken together, these reminiscences–some previously published, some written expressly for this book–bring into focus the passion, the wry self-deprecation, and the integrity with which this brilliant historian has always approached his work.

“Iridescent, so many brilliant refractions of light from his hard slog of discovering what life has really meant for the people in his narratives, the powerful and the powerless . . . Caro wanted the reader to feel for them, empathize with their ambitions and their torments. At 83, in book after book and now in this semi-memoir, he has succeeded to a breathtaking degree . . . How Caro finds what he needs to know . . . is par for the author’s tenacity, his charm and his investigative genius, no other word for it . . . Nearly 200 years ago, James Madison commanded that a people who mean to be their own governors must arm themselves with the power that knowledge gives. Robert Caro . . . has performed great deeds in that cause, but he has also measurably enriched our lives with his intellectual rigor, his compassion, his openness, his wit and grace.” —Harold Evans, The New York Times Book Review (cover)

“Riveting . . . Working complements and enriches our understanding of Caro’s life’s work . . . Endless research is only the start. What makes his books so remarkable is Caro’s polished and repolished literary style. Writing was easy. What mattered was thinking carefully about every phrase, every word. ” —Richard Lambert, Financial Times

“America’s biographer-in-chief . . . charts his own extraordinary life . . . The most delicious parts are behind-the-scenes snippets from interviews . . . Fellow journalists will delight in intrepid shoe-leather escapades.” —Aryn Braun, The Economist

“Insightful . . . A look at the writing craft from a true master of the form.” —Mackenzie Dawson, The New York Post

“Priceless. Legendary for his relentless research and bloodhound-like tracking of elusive facts, Caro explains how he does it . . . Fascinating and inspiring . . . A master class in research, reporting, and writing.” —Dennis J. McGrath, Minneapolis Star Tribune

“An inspiring window into the seemingly superhuman reporting, researching, writing, patience, and above all, will-power that have empowered Caro’s reinvention of the political biography and history genre . . . Working weaves through Caro’s career and provides the backstory of some of his best chapters . . . A reporter, author, or researcher will come away from this book armed with several new approaches to fact-finding and writing.” —Scott Detrow, NPR