Is there anything more glorious than the Beaux-Arts New York Public Library?  I don’t mean just for librarians, but for anyone.  Stop and think for a moment what this grand edifice has done in such a short time.  Begun in 1897, the Stephen A. Schwarzman Building, or more typically, the Main Branch of the NYPL, is of course an iconic fixture in Midtown Manhattan with, as seen below, Patience and Fortitude guarding the tree of knowledge since 1911.  (I felt an even greater sense of connection when I realized the lions’ marble is pink marble from Tennessee, home to my family for more than thirty years).  From the NYPL’s Renaissance style to Edward Laning’s Prometheus Bringing the Gift of Fire in the Rotunda, to the magnificent main reading room (also seen below), the NYPL with its myriad programs is really more than a mere library when you think about it. 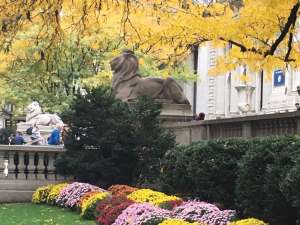 education may not have been possible.  Legal immigrants found a way to learn their new language and understand their new culture. Aspiring writers found an intellectual respite for their writing and research.  Would-be professors found a way to equip themselves for any task at hand. The NYPL may be responsible for more writers, critics, pundits, professors, and playwrights than any other facility in the country (though there are sure to be disputants about that claim).

One display I saw while there recently was a small one of more than two dozen books under a glass cloche, as it were.  These were the written contributions to which the NYPL provided their intellectual birth in the last twelve months alone.  Not many large universities can claim as much, a point only rivaled by our national library.  Moreover, writers such as Robert Caro, Stacy Schiff, Betty Friedan and E. L Doctorow have nurtured their works though the intellectual incubation of the New York Public Library and ultimately to the light of day. 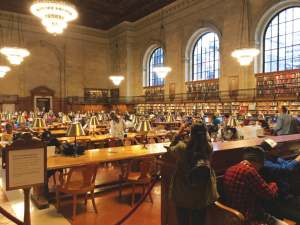 As I walked into the building again, I was struck by the dozens of names that grace the archways up to the Rose Reading Room.  Obviously many are well known, not the least of which are the founders, Samuel Tilden, John Astor, and James Lennox, the last two, incidentally, who originally named the lions after themselves (fortunately Mayor LaGuardia renamed them Patience and Fortitude).  Now some will certainly complain that these names evoke the robber baron era of the early 1900’s (especially since Astor is considered one of the original big four robber barons).  While the evilfare of robber barons on the whole cannot be gainsaid, we can recognize at least some of the good some of them did.

As my eyes lingered over the names of the original donors, I marveled at the foresight and generosity of so many of them.  Samuel Tilden deserves, of course, singular notice, bequeathing his estate and, through the brilliance of one of his trustees, John Bigelow, the rescue of the Astor and Lennox libraries and their absorption into the NYPL.  While Tilden’s estate (almost $70 million in today’s dollars) assured the success of NYPL, future donors made certain its perpetuation.  According to the library’s website, the building cost $9 million to complete, or nearly $260 million in today’s dollars.  Even with our billionaires — Gates, Zuckerberg, Buffet, Ellison, Page, Koch, Waltons, and Bezos, to name only a few — is there any confidence we could count on them — any of them — to undertake such a structure today?  I think it highly doubtful.

The philanthropists who built the NYPL have left it to a generation that no longer understands why we need libraries when you can carry (an ersatz) one in the palm of your hand.  What’s more, they have no stomach for their continued, and admittedly expensive, upkeep. This leaves me with a melancholy sense of loss. In some ways, just as medieval scribes poured their souls into illustrated manuscripts, giving their lives, literally, to preserve and prescribe knowledge, so also those philanthropists at the turn of the last century did the same in their own way:  poured their fortunes into magnificent libraries which now, more than 100 years later, are still serving millions — more than 30 million at NYPL alone — every year.

Patience and Fortitude are perfect symbols for what has become one of the most glorious libraries in the world.  And as I think about it, maybe the NYPL really is “only” that, a library, because it does what any library must do:  open to all its patrons worlds they never dreamed of, until they dreamed them there.