Column Editor’s Note:  The “Collecting to the Core” column highlights monographic works that are essential to the academic library within a particular discipline, inspired by the Resources for College Libraries bibliography (online at http://www.rclweb.net).  In each essay, subject specialists introduce and explain the classic titles and topics that continue to remain relevant to the undergraduate curriculum and library collection.  Disciplinary trends may shift, but some classics never go out of style. — AD

Fifty years ago, Andrew Sarris published The American Cinema: Directors and Directions, 1929-1968.1  The book was an expansion of an article he had written for the journal Film Culture entitled “Notes on the Auteur Theory in 1962.”2  Sarris claimed that directors are authors of the films they make, that they should be evaluated on the entire body of their work, and that judgment should rest on their technical competence, distinguishable personality, and the personal style that emerges from the tension between their personality and material.

Sarris did not originate the idea of the auteur.  He spent some formative years in Paris in the early 1960s and was inspired by the ideas of a loose alliance of French film critics and filmmakers writing in Cahiers du Cinéma that included André Bazin and Jean Luc Godard.  He was particularly influenced by the French director François Truffaut who introduced the idea of politique des auteur with his “polemical stance” behind the term auteur.3-4  The polemic behind the politique des auteur was to favor some directors and to disapprove of others based on the style of their films.  As a film critic in New York City for Film Culture and a movie reviewer for the Village Voice, Sarris used his platform to popularize the idea of the director as auteur in the United States.

At the root of the auteur theory is the idea that the personality of the best directors shine through in their films.  The result is that the audience will recognize directors’ styles by the recurring plots, themes, motifs, and images in their films.  While Sarris also focused on technical competence in his original article, he centered his arguments almost exclusively on personality in The American Cinema: “The strong director imposes his own personality on a film;  the weak director allows the personality of others to run rampant.”5  The strength of a director is important because making a film is a collaborative effort often restricted by the commercial nature of the movie industry.  “The auteur theory values the personality of a director precisely because of the barriers to its expression.”6

Pauline Kael, a movie reviewer for The New Yorker based in San Francisco, was highly critical of Sarris and auteur theory.  In a 1963 article originally published in Film Quarterly (reprinted in her collection I Lost It at the Movies), “Circles and Squares: Sarris and Joy,” she addressed each of the three premises of the auteur theory expounded by Sarris in his original article.7  She argued that expression and style are more important than technical competence, that the fact that a viewer can distinguish the personality of the director is secondary to the value of an individual film, and that cinema is not at all about interior meaning and the tension between the director’s personality and material.  As a result of these premises, Kael maintained that auteur critics often glorified trash.  She then explained her own views as a film critic. She believed that “art is an expression of the human experience.”8  Disparaging of formulaic critics who applied a single approach such as auteur theory, she considered herself a “pluralist” drawing eclectically and judiciously from “the best standards and principles from various systems of ideas.”9  In contrast to Sarris, Kael wanted critics to judge the individual movie rather than consider the director’s entire corpus.  Her riposte was the beginning of a series of ongoing debates in print and in person that attracted followers who identified as Paulettes or Sarristes.

Sarris doubled down when he published The American Cinema in 1968.  In his introduction, he briefly explained that he compiled the book to guide film students and then expounded at length on “the absence of the most elementary academic tradition in cinema.”10  To help fill this void, he delved more deeply into the idea of the auteur in his introductory chapter “Toward a Theory of Film History.”  In his afterword, “The Auteur Theory Revisited,” first added to the 1977 edition, Sarris addressed the criticism:  “Still, if I had to do it all over again, I would reformulate the auteur theory with a greater emphasis on the tantalizing mystery of style than on the romantic agony of the artists.”11  He concluded his afterword by conceding that “auteurism is and always has been more a tendency than a theory, more a mystique than a methodology, more an editorial policy than an aesthetic procedure.”12  The bulk of his book consists of a hierarchical ranking of (mostly) American directors and their works, a chronological list of films, and a directorial index.  His flamboyantly named categories included directors in and just outside of the pantheon, directors whose works were too esoteric or ephemeral for them to be considered great, directors who were too serious or merely likable, comedic directors, and directors who were too early in their careers to be thoroughly evaluated (see Figure 1).  Each category described what makes the directors auteurs and lists their films, highlighting the most worthy. 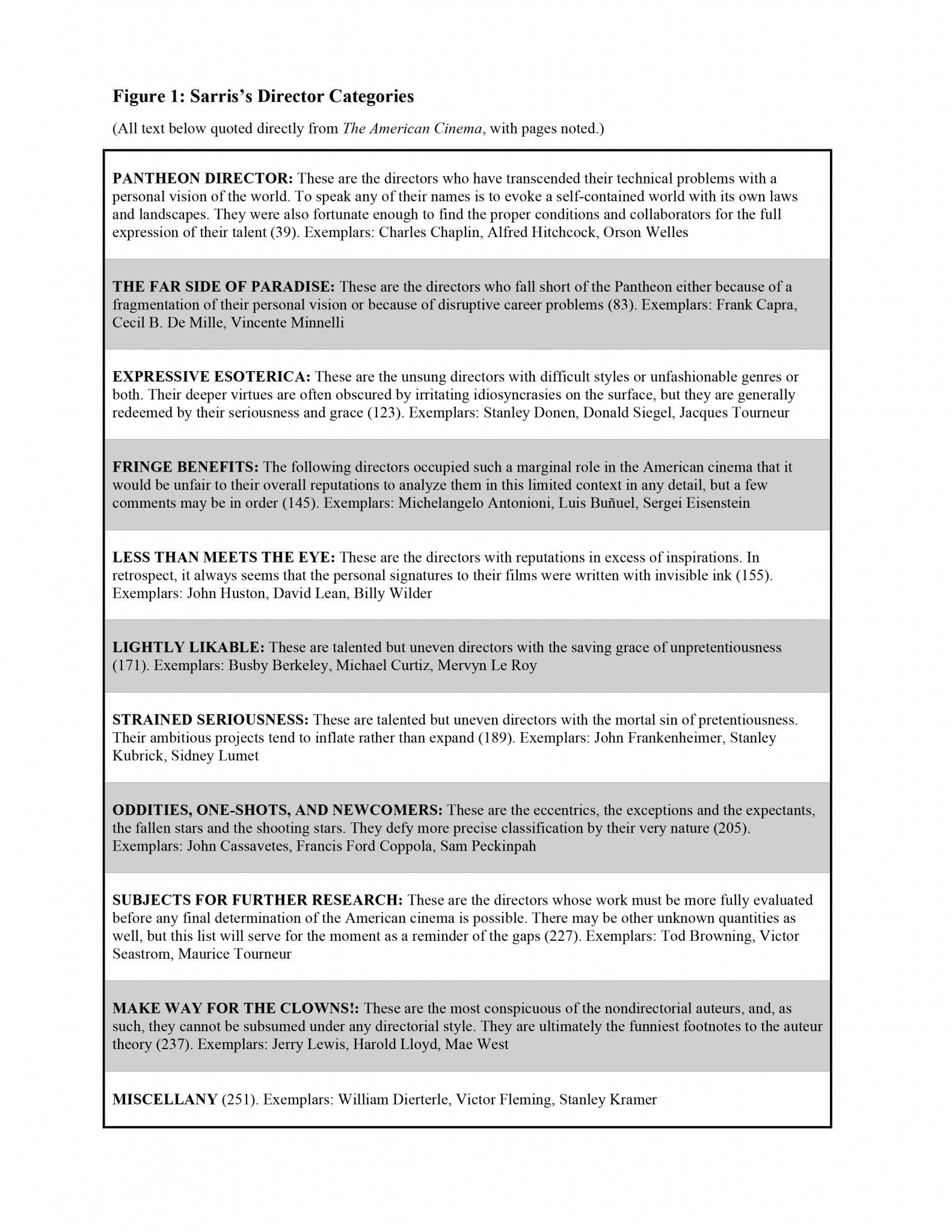 The auteur theory was widely embraced by many.  For many a movie lover and film student, The American Cinema served as a canon and a viewing guide.  Cinephiles sought opportunities to watch listed movies.  Art houses screened films. Critics analyzed filmmakers and films with an auteur lens.  Film schools taught classes on auteur theory and on directors. University and popular presses published academic books about directors.  Conversations abounded. Criticism of Sarris within these circles accepted the basic premise of directors as authors and instead focused on niceties, nitpicking who belonged in the pantheon and complaining that he included too many commercial directors and virtually no women.

The auteur theory was also rejected by many.  One major criticism was that auteur theory unfairly privileged the director over other creative artists.  Detractors argued that movie making is a collaborative art, with meaningful contributions from studios, producers, writers, cinematographers, sound designers, set designers, editors, actors, and more.  C. Paul Sellors, in his book Film Authorship: Auteurs and Other Myths, made a typical argument, proposing that his book’s purpose was to “provide further reasons to question the automatic assignment of authorship to a film’s director.”13  He traced the idea of the director as author back to romantic French notions of authorship and explored theoretical concepts of authorship around narrator and narrative to derive his definition of “film authorship as collective intentional action.”14  Modern auteur theory has evolved to assign creative responsibility to filmmakers other than the director, but still focuses on individuals most responsible for the style and expression in a film rather than upon a collective author.

The auteur theory was also seen as irrelevant by many.  Instead of focusing on the author and the value of the work, film theorists became more devoted to poststructuralist and ideological perspectives.  Poststructuralists read cinema with semiotic, psychoanalytic, literary, and Marxist lenses from the perspective of the viewer, disconnecting and dismantling the meaning of the film from authorial intent.  Ideological theorists with Marxist, feminist, postcolonial, or queer approaches interpreted and critiqued film with the aim of challenging dominant power structures and narratives. Neither epistemology found any relevance in auteur theory.

Nonetheless, despite the passage of time and the arrival of competing perspectives, auteur theory has persisted.  Whether this is due to romantic notions about authors, popular beliefs about how movies are made, or a genuine conviction that directors shape films more than any other creative talent, conversations about cinema often revolve around the director.  This fact is reflected in Resources for College Libraries, where nearly nine in ten works listed in the “Filmmakers” section are about directors.  This is not due to editorial viewpoint, but is a reflection of the published academic scholarship (though it is worth noting that the popular press publishes numerous books about actors in addition to directors).  Andrew Sarris and his book, The American Cinema: Directors and Directions, 1929-1968, played a significant role in the development of the idea that the director is the author of a film.  This influential work remains a relevant and consequential part of every academic library film studies collection.

*Editor’s note: An asterisk (*) denotes a title selected for Resources for College Libraries.