It’s only a few days, but 350 speakers deliver over 200 presentations, 146 exhibitors showcase their wares and over 1,600 attendees have countless conversations over breakfasts, lunches, dinners and drinks.  To pick just a few themes from so much information for an article like this isn’t easy…but here goes anyway!

IEEE predicted ten technology trends to watch in 20181 — and sure enough most of these were covered at the conference.  Seven sessions addressed issues of security and privacy — with much attention paid to the inadequacies of existing authentication and identity schemes.  Eighteen sessions dealt with issues around collaboration and community, close to double the number in 2012.

In general technology circles “Artificial Intelligence” is undoubtedly a hot topic.  This wasn’t obviously reflected in the program with no sessions explicitly including AI in their title and only one mentioning big data: Turn the Page: The New Data Realities for Librarians.  Perhaps this is because AI is really a catch-all for techniques that librarians and publishers have used for many years.  Machine Aided Indexing, text data mining, data aggregation, character recognition and automated classification aren’t new to our space — the main development is that processing power has increased to make these tools faster, cheaper and easier to use.  This in turn is leading to new developments like voice and handwriting recognition, better data visualizations and tools for analysis — all of which were covered as part of other presentations.

In This is the Future Libraries Want, Margaret Wolfe and Andrew French detailed which of these technologies were expected to impact libraries in the upcoming years.  See chart p.38 titled “Q3: Which technologies will be adopted by libraries in the next 10 years,” also available in color at https://schd.ws/hosted_files/2018charlestonconference/f8/This%20is%20the%20Future%20Libraries%20Want.pdf.

Only two sessions dealt explicitly with Virtual/Augmented/Mixed reality.  Carl Grant and I aimed to explain the technology and give practical examples in Is Your Library Prepared for the Reality of Virtual Reality?, while Thomas Lee, Tom Scheinfeldt and Michael Young presented Charles VR: A Virtual Reality Reconstruction of the Coronation Mass of Emperor Charles V in Bologna in 1530.

No audit of recent tech trends would be complete without a mention of blockchain.  Joris Van Rossum’s presentation Blockchain: The Big Picture for Publishing!, explained the technology in terms that I could understand easily, and even better, gave a clear, practical example of how the technology can be applied to solve peer review.  No slide he presented had more than a few sentences on it and yet it dealt effectively with the topic. A rare achievement for such a complex topic!

Yes, Open Access has been a frequent topic at library conferences over the past few years.  Yes, it’s been covered so many times that it’s become boring. But, this time, it’s different.

It’s different in definition:  in their presentation Words into Action: Building an Open Access Ecosystem, Ivy Anderson, Katherine Dunn, Sybille Geisenheyner and Rice Major expanded the definition of open to include discovery, reusability, transparency and sustainability.  In The Library’s Opportunity in Affordable Textbooks, Joe Esposito, Mark Cummings, Gwen Evans and Mark McBride did the same, pointing to the importance of being able to retain, reuse, revise, remix and redistribute content.  The ask is no longer simply to make things accessible — it’s much broader.

There was less philosophizing and more concrete data.  We saw practical examples of impacts and outcomes.  For example, Words into Action, showed detailed results for the CDL and how the RSC has “read and publish” arrangements in 44 institutions across 6 countries.

At the opening keynote, Anthony Watkinson asked pointedly how money is to be made from all this openness.  I didn’t see a clear answer during the show. Software publishers like to charge for their tools and so see little challenge with making content free.  Many content creators favor free software tools, and plan to charge for the content. Creators of community believe their social networks will eventually result in plenty of revenue opportunities.  But today the most revenues come from putting content behind paywalls. How is this to change? Will read and publish prove the solution? Will tools and services take over? It’s still not clear.

Years ago, a librarian explained to me that textbooks had no place in the library.  Charleston 2018 showed the opposite, delivering 8 sessions with the word “Textbook” or “OER” in the title.

The Library’s Opportunity in Affordable Textbooks detailed why this is so important for all academic libraries.  Mark Cummings, presenting data from a CHOICE survey showed only 11.8% of instructors used books as instructional material against 93% for textbooks.  As Dr. Gerry Hanley, the Director of MERLOT once told me — how does it make sense that materials students might need are available free in the library, but materials they must have need to be purchased?  See chart p.38 titled “Textbooks constitute the core of all course-material adoptions.”  The chart can be viewed in color online and the entire presentation can be downloaded from https://schd.co/G8SM.

My vote for “Top Graphic of the Show” goes to Gwen Evans in Data Expeditions: Mining Data for Effective Decision-Making session.  A single graphic based on hundreds of thousands of data showing which journals are delivering the best and worst value…  See data chart p.38, also available in color at https://schd.ws/hosted_files/2018charlestonconference/75/Evans_Different_Views_Data_Charleston_2018.pdf.

I don’t have a way to analyze the number of presentations that presented original data, but my impression is that it’s never been larger.  Budgets remain tight. Enrollments are down. There’s not much room for increased tuition. Administrators urgently need to identify opportunities to save.  At the same time the increasing electronic content and tools generate large amounts of data.

It is no surprise then that librarians turn to data to make their case.  This is an area that will grow.

Sessions on adaptation and change have been a staple at Charleston over the years.  Every year since 2012 there have been at least 5 sessions that included variants of these words in their title.  This year there were close to 25. Such a level of change leads people to ask whether or not such change is within the existing mission.

Together the sessions of 2018 show where this change is taking us and what we need to do.  Publishers are asked to find a way to serve their investors as well as their customers, even as open access erodes the pay-before-you-access business model that’s worked well for hundreds of years.  Librarians are asked to play a much more central role in the university — with new tools and services like providing e-textbooks, digital instruction, content dissemination and to reinvent and automate traditional roles as curators and intermediaries. 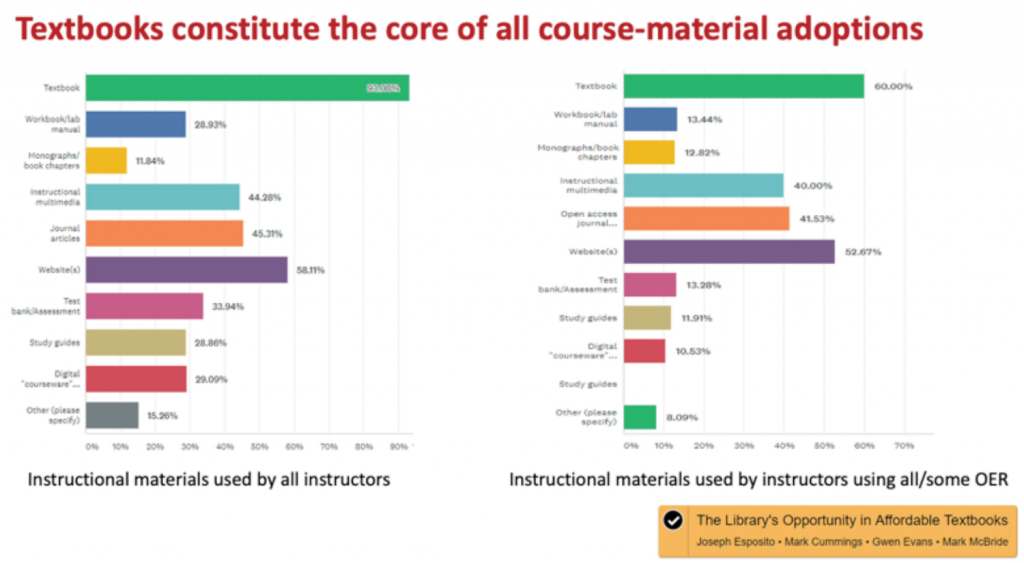 A quick web survey shows this is absolutely within the current remit of academic libraries.  It’s all about improving teaching and learning outcomes as these mission statements show:

Kent State: “To deliver unparalleled opportunities for success in learning, research and discovery to our users.” 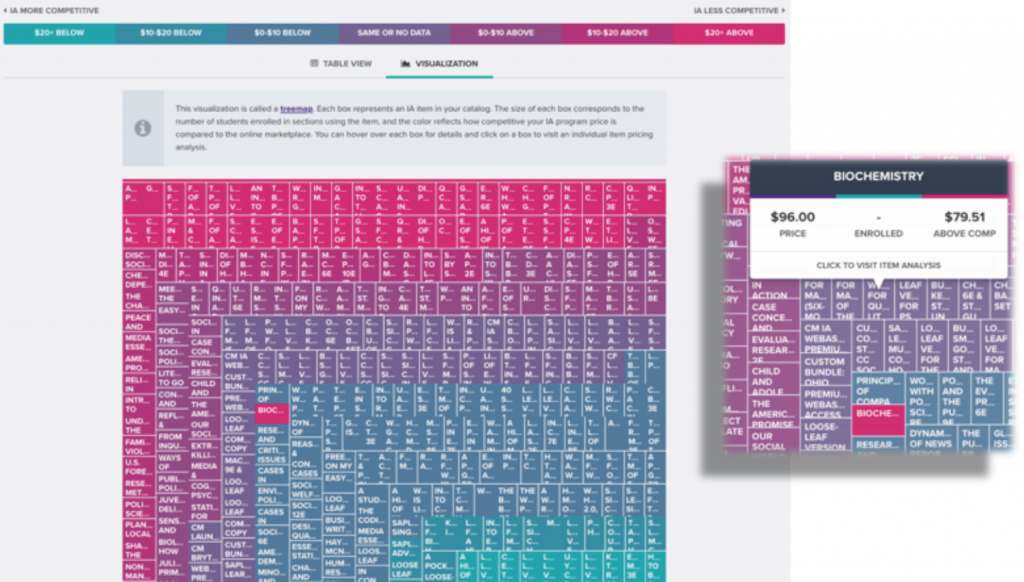 Sessions end with a Q&A.  In a session on OER a librarian asked about how urgent it was.  The presenter’s reply — “You need to get involved before outsiders make decisions for you that you don’t like.”  It’s that simple. If the library is to be central to the academy it must embrace the future quickly and deliver results across the entire institution.