There are a lot of reasons to go to the Charleston Conference:  weather, food, people, and that buzz of excitement — and Liberty the eagle at the Aquarium.  I always expect to learn new things and always wind up learning ones I didn’t expect. This year was no exception.  Of course, I thought Ruth Okediji’s plenary talk was amazing, and I know I will always learn new things from Ann Okerson’s legendary Long Arm of the Law sessions, this year featuring Bill Hannay and Kenny Crews.  But it was something else that truly hit home.

At ASU, as at many large libraries, we’ve invested over the last years in a high-density shelving facility on the Harvard model.  We had one module nearing capacity when I started in 2015 and were quickly authorized to build two more modules to support a reinvention of our collection practices, driven in tandem with our desire to empty out the largest stack tower, the Charles Hayden Library on the Tempe Campus, for a two year gut-and-reno transformation.  We moved quickly, and we moved a lot of books. The logistics were intimidating, but fortunately ASU has space at our Polytechnic Campus (formerly Williams Air Force Base in Mesa) and so we scored an unused middle school with air-conditioned gymnasium to use for a staging area for the books that needed processing.

So:  we’ve moved them.  They’ll be done processing soon.  We’re retrieving for use efficiently.  Whew.

Now what?  Before I went to Charleston, I was thinking quite a ways down the road.  High-density facilities are typically built to provide near-ideal conservation conditions for the analog materials they hold, with air-conditioning down to 50 degrees Fahrenheit and humidity at 35%.  Every time I visit that facility, I have a little creeping feeling that I can hear the voice of a future Provost, speaking to me or (I hope) one of my successors: “Fifty degrees? That plants a pretty big carbon footprint, doesn’t it Mr/Ms Librarian?  I sure hope that we’re getting a lot of usage out of all the print material you store there at that cost! We are, aren’t we?” I confess, when I hear that voice, I worry a bit: the march of digitization and the march of time will have their impact, and I’m not sure just how much call we’ll have on that material in 20 years.  Does anybody?

Nonetheless, I’ve been pretty good at pushing aside the sound of that voice and sticking to business.  We know we’re doing the right things, after all. Logic dictates that it doesn’t make sense to go in there and try to weed the high-density stacks of low-use items.  After all, it’s costly in human resources to identify and remove items, and, when you do, those acid-free cardboard trays aren’t well-suited to harvesting space. It doesn’t get us much reusable resource when we pull one or even two volumes out of a particular tray.  We’re not going to go back and fill it up again with more. So it’s easier — right? — just to leave the books all there.

So I suddenly sat up very straight and looked startled when Gwen Evans of OCLC gave a presentation on the big stage about flipping the model.  OhioLINK has multiple repositories around the state and has begun to work on de-duplication and space recovery.  And they flipped the model, I say, starting not with the low-use items but with the high-use and high-value items.  They imagine that they could de-duplicate and deaccession as many as five out of every six volumes in those repositories.  So they’re starting by looking for the ones they won’t deaccession. This means looking for unique and near-unique items — you can define near-unique in terms of number of copies reported in WorldCat — and extracting them from the high-density ocean, moving them to open space elsewhere in the repositories.  The idea is that when they’ve worked through the whole system and identified all the items they’re sure they want to keep and set them aside, they could then deaccession the remaining 80+% en masse without close examination.  If they are right about which items are more valuable or possibly more valuable, then it will follow that the rest can be handled brusquely. That means an 80% reduction in the projected time and cost of moving from full repositories to repositories containing materials that will be sufficiently distinctive to make that conversation with a future Provost go more smoothly.  I took notes on Gwen’s talk.

Then I went along the next day to be a judge at another Ann Okerson production, the Fast Pitch competition made possible 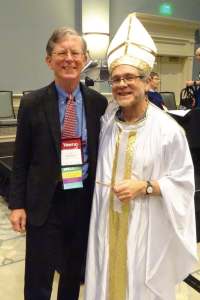 by a gift from philanthropist Steve Goodall — Charleston’s Mr. Wonderful, if you ask me!  We had great competitors this year from the Auraria Library in Denver (they serve several local academic institutions), Illinois Institute of Technology, Smith College, and the University of Connecticut.  (I even got my picture taken later with His Holiness, Michael Young of UConn, there to present a beautiful virtual reality project involving early modern church dignitaries!)  IIT and Smith were the two prize-winners, but it was Smith that gripped my attention.  They are developing real management software for those of us who operate high-density systems — inventory and operation, with data gathering and analysis better than anything we now have.  And it’s cheap and easy to setup and it runs on many devices — including tablets for access while you’re walking around the facility. They made me realize that we really have all given way to the “Whew” I expressed earlier — the “Whew” that comes when you have done the mighty work of getting the materials into their new location and processed and ready to serve up.  We’ve concentrated on getting that work done and on operating the repositories, and we do that well. (I think at ASU we may do it better than most, but I expect I’d get an argument on that.)  But thoughtful management — and Gwen Evans’s insights were one piece of that — of the kind that Rob O’Connell and his colleagues at Smith are bringing forward really will help us do our jobs better by being data-smarter and more proactive in finding out how best to use these great facilities in the future.

So there I am:  back from Charleston, behind on my work and bringing more ideas for new work to discuss with colleagues.