Being an examination of Immersive Participatory, Interactive Analog Games and Their Use in Education in General and Libraries in Particular….….before I forget

First I want to say that I am not the first to summarize an article in the title (thank you Mr. Swift).1  Second, I want to state that never in a million-zillion years would I ever succumb to needless hyperbole.  But, what I am going to tell you is spectacularly revolutionary.

Previously, I waxed on about how analog (board) games are experiencing a resurgent public interest.  The recent theme of this column has been how this analog game renaissance is starting to figure prominently in training and education and how this is affecting libraries.  Specifically, I expounded on recent library practice of turning to the design and use of escape rooms to enhance and inspire their instruction and promotion. I recently came across some information that has shed more light on this analog / education / library phenomenon.  It’s about human attention span and forgetting almost everything….if I remember correctly.

I am a multifaceted person.  Okay, I have at least two facets.  I love games, and I forget things on a regular basis. It’s what I do.  Now I assume (and hope) that there is not a direct connection between these two things.  But, now I know that one can certainly positively affect the other. Do I mean to say that forgetting things can make one better at playing games?  Not exactly. But, leaning, after all, is systematic memorizing, and the ability to pay attention greatly helps to build this systematic memory. Also, it helps to not forget so much.

Well, that is depressing.2 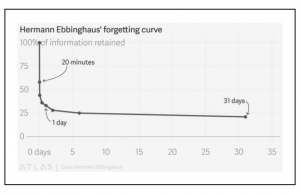 Now add to this the fact that the amount of knowledge actually learned in a lecture classroom in the first place is limited due to a student’s attention span.  It has been estimated that the average attention span in a lecture classroom is seven to ten minutes.3  Probably for an article it is a bit longer, but I’m still going to assume that I have only about ten minutes before I lose most of you.  Bottom line here is that learning is hard. What could possibly help to increase attention and retention?

Really?  Well, maybe…kind of.  But, before you yell “game it, baby” and charge into the classroom brandishing your copy of Mavis Beacon Teaches Typing, let’s look at the application a bit more closely.

Teachers know — and educational psychologists have confirmed — some definitive characteristics that the most effective learning programs have in common:

So, that’s a no-brainer.  Games contain all of these things.  So, go educational games! Yaaa! Well, maybe.

When most folks talk about “educational games,” they tend to think of video or digital games.  In fact, when the “games in education” tidal wave first started washing over education, it was in the form of digital games.  Though primitive at first (ahh, pong) these video and computer games offered the promise of access to effective and engaging and fun learning tools.  Remember “Oregon Trail” and “Reader Rabbit” and “Math Blasters” and how these flashy interactive dispensers of knowledge virtually replaced teachers in the classroom?

Me neither.  Well, we don’t’ have flying cars either.  To be fair we have come a very long way from those early digital days.  The ability of digital technology like virtual reality, to allow students to simulate environments and manipulate objects in 3D space is phenomenal and is revolutionizing learning.  Indeed, not only are digital and video games a multi-billion dollar business that is bigger than the movie industry, but games and gamification that use digital technology dominate the “educational” market.

Unfortunately, many of these digital, special effects filled wonders — if they are used in any routine or formal way in teaching — are offered to students just for practice and to make rote learning a bit more palatable.  To be sure they do this very well. But, though these digital games have awesome special effects and do indeed engage and even mesmerize individual students, most of them rarely test for and provide practice for more than dexterity, and good memorization skills.  Most are designed for individual — one face to one screen — interface. This of course leads to the lab condition known as “everyone being together in the same room alone.” Even in massive multiplayer online games, players are sometimes not even in the same country, much less the same room.  Social engagement is not exactly a strong feature.

The analog equivalents of the digital revolution in education do have this strong, defining feature.  Indeed, there are a group of analog games that share distinct characteristics that make them ideal social learning and teaching platforms.  I have been unable to find one encompassing identifying term in the literature, so I have boldly coined a term myself. I call these “collaborative multi-player immersive games.”  So, you noticed that I’m still working on that catchy label thing.

Unlike solo digital games where a single player may be engaged in a highly detailed multiplayer virtual environment, these analog equivalents are in a room with real humans.   Basically, these activities involve putting a group of players directly into a problem or issue or scenario while providing a mechanic to allow the players to interact cooperatively (or not so cooperatively) to resolve or experience the scenario.  Their common denominator is real time, group, social interaction in a fully immersive environment.

The most ubiquitous example of this concept is of course the growing entertainment phenomenon and lucrative business model of “escape rooms.”  Basically, it’s just a recent form of problem based learning in a box (or room). We have seen how this “escape room” concept has been adopted by educators and librarians to enhance learner engagement, enliven subject content recall, and encourage and inspire student motivation.  But, though “escape rooms” represent the recent lion’s share of such games used by educators, megagames and Edu-LARPS are also being adapted for classroom use.

I will be going into detail about Edu LARPs and megagames in a future column, but briefly an Edu LARP (educational live action role playing game) is a form of role-playing where participants physically and vocally role-play their character within a particular scenario and pursue goals within the scenario while interacting with other players in character.  Scenarios might involve the French Revolution, the Continental Congress, or the Treaty of Versailles. Of course it could be something much less controversial like the Salem Witch Trials or the Bret Kavanagh Hearings.

Edu LARPing “is a form of experiential learning that engages students on multiple levels, including cognitive, affective, and behavioral.  Similar to drama pedagogy and simulation, edu-larp employs scenarios in the classroom in which students enact roles and engage with class content.” 4  A good example of this is a program run by Barnard College called Reacting to the Past in which students supplement the scenarios with intensive research and writing.5

A megagame has been characterized alternatively as a hybrid LARP/board game, a LARP with an attached game board or a board game with Escape room elements and mechanics.  It’s something that has to be seen to be believed. Large number of players (sometimes in the hundreds) are divided into teams that represent different factions (countries or clans) or factions within teams (gangs, government leaders).  It’s like a model UN on steroids with added intrigue and interaction. It is social dynamics that is part board game, part LARP and all analog.

Needless to say, learning activities that involve immersive group interactive problem solving are highly satisfying and conducive to a higher degree of learning engagement and retention.  Learning is still hard work, and it can still be frustrating. But, it is now work that is engaging, challenging and increases attention and retention.

In an earlier column I detailed how the concept of John Nesbitt’s “high tech high touch” explains the recent resurgence of board game design and the growing popularity of analog interactivity.  An article in Games and Learning notes that, “players of digital games… rarely play together and side-by-side, whereas players of analog games expect a more slower-paced and chatty group experience.  Considering verbal and non-verbal cues as well as the immediacy of social peers sitting right next to each other, there is a visceral difference between playing an analog game versus playing a digital game.”6

“I think there’s a level of communication that we have not been able to codify and that doesn’t come through in a video game,” says Joshua Archer, director of Icaria Educational Role Playing Games.7

All of this inter and intra-group interactivity stuff clearly goes to the heart of a critical learning issue that humans crave above all else and actually defines us as a species: our ability to communicate and our need for in-person social interaction.  It seems to me that if we are to bring out the full learning potential and understanding of our students and our library patrons, we need to take advantage of activity which our species is the most effective: the creative power of collaborative social groups and having a blast doing it.  Somewhere in America a library escape room megagame LARP is in the works. I need only convince my colleagues to wear those Orc outfits on the reference desk with more dignity.