ATG Article of the Week: Libraries and Librarians Aren’t About to Disappear

ATG Article of the Week: Libraries and Librarians Aren’t About to Disappear

Lindsay McKenzie, who is the Technology Reporter for Inside Higher Ed has written an article that should bring a smile to your face. Her post Libraries and Librarians Aren’t About to Disappear reports that “a widely shared article declaring libraries and archives to be among the fastest-declining industries in America has been debunked.” And she goes on to prove it.

Ms. McKenzie examines the article “America’s 25 Dying Industries” which was originally published by 24/7 Wall St. and “ranked libraries and archives as one of the fastest-declining industries in the U.S., second only to video tape and disc rental.” She notes that leaders in the library world immediately doubted the validity of the figures being used and challenged them. However, “the scale of the error had not been pinpointed” until, according to Ms. McKenzie, the folks at Insider Higher ED saw a major discrepancy in the statistics being quoted by the authors of the article.  She then goes on to tell the full story of their mistake, how it was made and why they got it wrong. 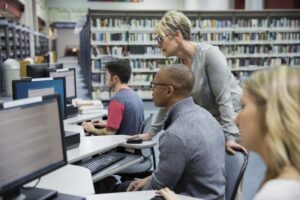 Ms. McKenzie also reports that there was a bit of a happy ending. “Following several emails from Inside Higher Ed, 24/7 Wall St. issued a correction on the story (now titled “America’s 24 Dying Industries”), stating that “due to Bureau of Labor Statistics data suppression, 24/7 Wall St. incorrectly identified libraries and archives as one of the industries losing the most workers. In fact, employment has remained stable.”

Unfortunately, there are still versions of the uncorrected article that show up online so if you hear someone quoting it at a dinner party, gently inform them that it has been debunked and refer them to Ms. McKenzie.