ATG Book of the Week: Ex Libris: Stories of Librarians, Libraries, and Lore

ATG Book of the Week: Ex Libris: Stories of Librarians, Libraries, and Lore 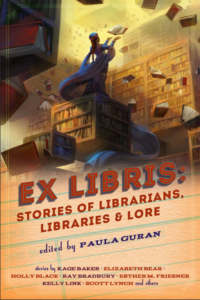 Portals to all the knowledge in the world, libraries are also created universes of a multitude of imaginations. Librarians guide us to enlightenment as well as serving as the captains, mages, and gatekeepers who open the doors to delight, speculation, wonder, and terror. This captivating compilation of science fiction and fantasy short fiction showcases stories of librarians—mysterious curators, heroic bibliognosts, arcane archivists, catalogers of very special collections—and libraries—repositories of arcane wisdom, storehouses of signals from other galaxies, bastions of culture, the last outposts of civilization in a post-apocalyptic world…grand adventures and small sagas of the magical places we call libraries and the wizards who staff them!