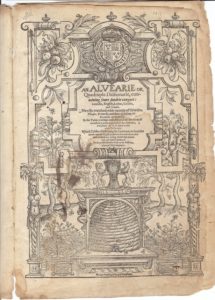 According to this post on The Atlantic the answer may be yes. Two New York City booksellers claim that they have Shakespeare’s Personal Dictionary on eBay.

Many scholars think that Shakespeare consulted a 1580 dictionary published in London called An Alvearie, or Quadruple Dictionarie. Now, two antiquarians, George Koppelman and Daniel Wechsler, believe they’ve found the copy. It surfaced on eBay, naturally, where the book’s 1580 publication date and a seller’s reference to “contemporary annotations” caught Koppelman’s eye. But some experts say wait a minute. The handwriting in the margins may tell a different story!

Who’s right? Read the article and decide for yourself.