ATG Book of the Week: Documents That Changed the Way We Live

ATG Book of the Week: Documents That Changed the Way We Live 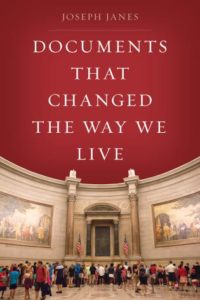 Documents are milestones and markers of human activity, part of who and what we are. Our story can be told through the objects, profound and trivial, famous and forgotten, by which we remember and are remembered. Documents That Changed the Way We Live examines dozens of compelling stories that describe these documents; their creation, motivation, influence, importance, historical and social context, provenance; and their connections to contemporary information objects, technologies, and trends. These documents include the following:

This is, as consummate library and information science educator, author, and veteran American Libraries columnist Janes explains, ‘the printed and illustrated version of a podcast series . . . started in 2012 called Documents That Changed the World.’ By documents, he means ‘the various kinds of things we create, intentionally and otherwise, to record and remember.’ And what variety! Here readers will find essays on topics as diverse as the Rosetta stone, the Fannie Farmer Cookbook, the Gregorian calendar, the Book of Mormon, the Nineteenth Amendment, the Richter scale, the Zapruder film, the AIDS Quilt, and the Vietnam Veterans Memorial. Ranging in length from three to six pages and accompanied by illustrations and lists of sources, each portrait of a document recounts its origin and background and often poses some interesting questions about it. This lively, engaging book is much more than what we used to call a ‘miscellaneous book of facts’; it’s an informative, occasionally ironic look at some of the most iconic records and significant texts in human history. Recommended for any library collection.
— Booklist

Janes’ book is a perfect example of the sort of nonfiction I most enjoy. Not only is the writing lively and accessible, but I feel a whole lot smarter after reading it.
— Nancy Pearl, author of the Book Lust series and George & Lizzie: A Novel and NPR/Morning Edition commentator

From the Georgian calendar to Pope Benedict XVI’s letter of resignation, this collection of fascinating and irreverent essays represents an eclectic selection of documents that illuminates our modern way of life. The brief description of each document eloquently summarizes its historical context as well as its meaning in our digital age. Exemplary work from one of our most observant library thought leaders
— Susan Hildreth, professor of practice, University of Washington Information School