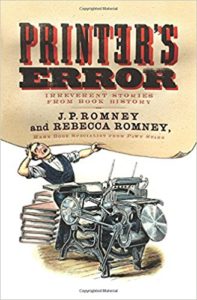 “A funny and entertaining history of printed books as told through absurd moments in the lives of authors and printers, collected by television’s favorite rare-book expert from HISTORY’s hit series Pawn Stars.

Since the Gutenberg Bible first went on sale in 1455, printing has been viewed as one of the highest achievements of human innovation. But the march of progress hasn’t been smooth; downright bizarre is more like it. Printer’s Error chronicles some of the strangest and most humorous episodes in the history of Western printing, and makes clear that we’ve succeeded despite ourselves. Rare-book expert Rebecca Romney and author J. P. Romney take us from monasteries and museums to auction houses and libraries to introduce curious episodes in the history of print that have had a profound impact on our world.

Take, for example, the Gutenberg Bible. While the book is regarded as the first printed work in the Western world, Gutenberg’s name doesn’t appear anywhere on it. Today, Johannes Gutenberg is recognized as the father of Western printing. But for the first few hundred years after the invention of the printing press, no one knew who printed the first book. This long-standing mystery took researchers down a labyrinth of ancient archives and libraries, and unearthed surprising details, such as the fact that Gutenberg’s financier sued him, repossessed his printing equipment, and started his own printing business afterward. Eventually the first printed book was tracked to the library of Cardinal Mazarin in France, and Gutenberg’s forty-two-line Bible was finally credited to him, thus ensuring Gutenberg’s name would be remembered by middle-school students worldwide.

Like the works of Sarah Vowell, John Hodgman, and Ken Jennings, Printer’s Error is a rollicking ride through the annals of time and the printed word.”

“Printer’s Error is an entertaining entry in the always fascinating books-about-books genre. The Romneys make good on the irreverent premise that ‘the printed word is glorious, but it’s also nuts.’ How, they ask, can that be so? ‘Because we are gloriously nuts.’ It’s a keeper.” (Nicholas A. Basbanes, author of A Gentle Madness: Bibliophiles, Bibliomanes, and the Eternal Passion for Books and On Paper: The Everything of its Two Thousand Year History by a Self-Confessed Bibliophiliac)

“Who knew the printed book could be so fun? J. P. and Rebecca have written a real page turner. Printer’s Error is truly a rare treasure.” (Rick Harrison, author of License to Pawn and star of Pawn Stars)

“Captivating. It’s like standing in line and overhearing an animated conversation just ahead of you about the secret world of rare books—and hoping you hear it all before they get to the front of the line and wander off someplace else!” (John Simpson, author of The Word Detective)

Written in an engaging, accessible style, these accounts will appeal to fans of Pawn Stars, as well as scholars of literature and printing history. (Library Journal)