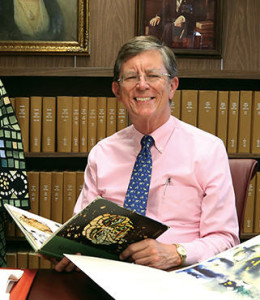 On today’s episode we talk with Jim O’Donnell about the ongoing renovations of the Hayden Library on the campus of Arizona State University, and their goal to make the library a showcase, showplace and showroom for ASU students. Jim also shares his thoughts on taking inspiration from the world of retail to shape the future of academic libraries.

We had several challenges to deal with in the production of this week’s show. The first of which was carving time out of Jim O’Donnell’s busy schedule. Jim had just returned from the 19th Annual Fiesole Collection Development Retreat in Lille, France the day before. This was the same conference that Leah Hinds attended as representative for Against The Grain. Due to the time difference between us on the east coast and Arizona State University, Jim started what was to become a very busy week for him by speaking with us at 7:30 in the morning his time.

The other challenge involved the ever-present complexities of conducting remote interviews using the Internet. Each participant in today’s discussion was in a different location as usual, and between intermittent Internet connection dropouts and some occasional noise coming from Jim O’Donnell’s headset, our audio quality suffered a bit at times. Sound issues aside however, Dr. O’Donnell provided us with excellent insights we’ve come to expect from him.

Our interviewers today are Tom Gilson, Associate Editor of Against The Grain; and Katina Strauch, Editor in Chief of Against the Grain and founder of the Charleston Conference.

Dr. O’Donnell received his bachelor of arts degree at Princeton and doctorate from Yale. He served as provost and professor of classics at Georgetown University for a decade, after a career at Bryn Mawr, Cornell and the University of Pennsylvania where he served as Vice Provost for Information Systems and Computing. He is a fellow of the Medieval Academy of America and served as president of the American Philological Association. He now chairs the board of directors of the American Council of Learned Societies. Dr. O’Donnell was a pioneer in the scholarly study of late antiquity. His edition of Augustine’s *Confessions* is a standard, while his most recent books, Augustine: A New Biography, The Ruin of the Roman Empire, and Pagans bring cutting-edge scholarship to a wide audience.

Dr. O’Donnell is also recognized as an innovator in the application of networked information technology in higher education having authored the book Avatars of the Word: From Papyrus to Cyberspace. In 1990, he co-founded the Bryn Mawr Classical Review, the second on-line scholarly journal in the humanities ever created. In 1994, he taught an Internet-based seminar on the work of Augustine of Hippo that reached 500 students which deserves to be called the first MOOC.

Currently, he is leading Arizona State University library through a reorganization process that includes a multimillion dollar renovation of the main Hayden library.

As one of his colleagues has so aptly put it “Jim O’Donnell is both a brilliant scholar and a visionary about the future of information. He knows how to put together leadership teams, even as he thinks creatively about the nature of knowledge for students, researchers and the community.”