ATG Quirkies: You Know You’re Somebody If You’re In This File Cabinet

ATG Quirkies: You Know You’re Somebody If You’re In This File Cabinet 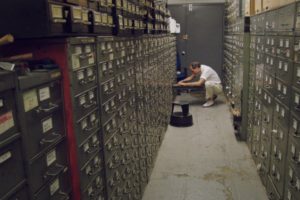 Well, at least you were somebody!

The file cabinet under discussion is the New York Times obituary archive that is featured in a recent documentary film entitled Obit.

This insightful documentary, by filmmaker Vanessa Gould, “examines the strange lives of the journalists who man the death-desk” at the revered “Grey Lady.” According to this post in the New Republic “the practicalities of their workday are the documentary’s best details.” It also reveals their commitment and motivation, not to mention the demands of their unique calling.