ATG Book of the Week: The Accidental Life: An Editor’s Notes on Writing and Writers

ATG Book of the Week: The Accidental Life: An Editor’s Notes on Writing and Writers 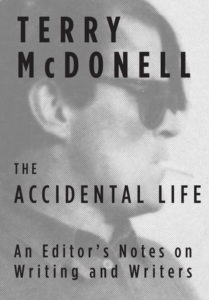 A celebration of the writing and editing life, as well as a look behind the scenes at some of the most influential magazines in America (and the writers who made them what they are).

You might not know Terry McDonell, but you certainly know his work. Among the magazines he has top-edited: Outside, Rolling Stone, Esquire, and Sports Illustrated. In this revealing memoir, McDonell talks about what really happens when editors and writers work with deadlines ticking (or drinks on the bar). His stories about the people and personalities he’s known are both heartbreaking and bitingly funny—playing “acid golf” with Hunter S. Thompson, practicing brinksmanship with David Carr and Steve Jobs, working the European fashion scene with Liz Tilberis, pitching TV pilots with Richard Price.

Here, too, is an expert’s practical advice on how to recruit—and keep—high-profile talent; what makes a compelling lede; how to grow online traffic that translates into dollars; and how, in whatever format, on whatever platform, a good editor really works, and what it takes to write well.

Taking us from the raucous days of New Journalism to today’s digital landscape, McDonell argues that the need for clear storytelling from trustworthy news sources has never been stronger. Says Jeffrey Eugenides: “Every time I run into Terry, I think how great it would be to have dinner with him. Hear about the writers he’s known and edited over the years, what the magazine business was like back then, how it’s changed and where it’s going, inside info about Edward Abbey, Jim Harrison, Annie Proulx, old New York, and the Swimsuit issue. That dinner is this book.”

“Intelligent, entertaining, and chivalrous . . . McDonell, founding editor of Outside magazine in 1977, has had tenures at or near the top of Rolling Stone, Newsweek, Esquire and Sports Illustrated. Slashing costs and watching serious writers take buyouts felt [to him] ‘like a great library was burning down.’ But The Accidental Life is a fond book. It’s a fan’s notes from a man who, before the apocalypse, edited and often befriended many of his literary heroes . . . He played touch football and ate oysters with James Salter; golfed while on LSD with Hunter S. Thompson and George Plimpton; canoed and drank with Peter Matthiessen; and helped explode an uptight dinner party alongside Edward Abbey . . . McDonell’s insistence on keeping the focus on his writers rather than himself has a humble appeal—this memoir is far from self-congratulatory. He writes winningly about his regrets [and] evokes the magazine-world heyday of lavish offices, drinks carts in the evening and expense-account hedonism. Some of the details will make freelance writers scream (I screamed, and I rarely write freelance any longer.) The Accidental Life is a savvy fax from a dean of the old school.” —Dwight Garner, The New York Times…

“If you dig New Journalism, Ed Abbey, fiction, nonfiction, Western writers and their New York editors, and the good old days of Elaine’s, you will eat up McDonell’s memoir/literary history. Damn, that sounded like fun.” —ELLE Magazine

“Revelatory, poignant . . . instructional. The Accidental Life is one man’s manly writer stories; a writing guide—a young (or old) writer could learn a lot from the advice McDonell has gleaned [and] from his own crisp, thoughtful sentences; a eulogy for the magazine business of yore; and an engaging, soulful tribute to stories of all kinds and the quirky, complicated people who craft them. ‘There is nothing finer than deciding to write,’ McDonell begins [his book]. Anyone who agrees with that sentiment will want to read everything that follows.” —Michael Merschel, The Dallas Morning News

“Informative, inspiring, often surprising; rich in anecdotes . . . McDonell made the masthead at major publications, shaping his own stories and those of other writers from the 1970s through the early years of this century . . . By the lesson of his own style—his tight, flowing sentences—he shows how to put words on paper. It’s with author profiles that McDonell’s book acquires value: an essay on Elaine’s may amuse would-be diners who couldn’t get a table when Frank Sinatra could. Other profiles are more contemporary, including insightful takes on novelists Richard Price and Richard Ford and a painful recollection of troubled media guru David Carr. Observations on money, writer’s block and letters to the editor: editing success is all in the mix, and the mix McDonell achieves is just so. He holds off until the end of his book to explain its title. Redemption in work, he reflects, kept life steady against the accidental when ‘friends faded. Life failed.’ McDonell’s best pieces capture the accidental when they take unexpected turns that lend his writing insight and humanity.” —Gerald Bartell, San Francisco Chronicle

“An insider’s view of the magazine industry, from its apex in the ’70s to the rise of the Internet and online content and decline of print journalism—by a man who was present to witness these titanic shifts. McDonell offers stories of luminaries of various stripes, including George Plimpton, Hunter S. Thompson, Steve Jobs, a cigar-smoking and mostly silent Arnold Schwarznegger, and Margot Kidder . . . As with many editors, McDonell effaces a large part of himself in [the book]; his invisibility allows these writers, subjects, friends, and bosses to shine more brightly. He offers nuance and depth.” —Erin Gianni, PopMatters

“In a series of sharp vignettes, McDonell takes readers behind the scenes of the publishing world to reveal the humorous and at times difficult relationships between writers and their editors.” —Poets & Writers
* “As a former top-of-the-masthead editor at Outside, Rolling Stone, Esquire, and Sports Illustrated, McDonell has been there and done that over four decades of dramatic change in the magazine business. Along the way, he’s edited and drunk with a who’s who of American writers. Naturally, he has stories to tell, and he tells plenty of them in this unfailingly fascinating look at that point where publishing, literature, and celebrity meet . . . This is the perfect example of blending showstoppers with perceptive appreciations of the work of McDonell’s favorite writers, and fascinating snippets on the craft of editing. Expect this book to find a home on the desks of just about everyone who has anything to do with magazine publishing (or who likes to read about hanging out at Elaine’s with famous writers).” —Bill Ott, Booklist (starred review)

“Writers can take on a mythic quality: solitary figures who conjure imaginary worlds and see more than the rest of us. In this memoir, some of the most colorful literary titans to ever walk this earth indeed live up to their legends. But the gold in McDonell’s book is the lessons he took from these writers, beyond the bravado and antics that often characterized their work, about how to perceive the world.” —Nate Hopper, TIME