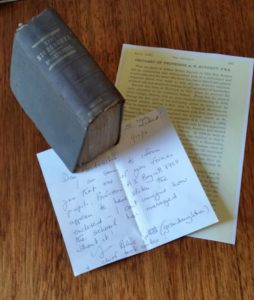 According to BBC News an overdue school library book has finally been returned – 120 years late.

“The Microscope and its Revelations, by Dr William B Carpenter, was borrowed by former pupil Professor Arthur Boycott, who attended Hereford Cathedral School between 1886 and 1894.

It was discovered and returned by his granddaughter Alice Gillett. (along with an accompanying note explaining the situation.)

The school has promised to waive any fines – which based on the rate at Hereford Library of 17p a day, would have amounted to a staggering £7,446…”