ATG Quirkies: What Rhymes with Michigan? Poetry in the National Parks.

ATG Quirkies: What Rhymes with Michigan? Poetry in the National Parks.

According to this post in the Detroit News “visitors to Michigan’s three national parks this summer are in for a treat. In addition to the wonders of nature, they might also get an unexpected dose of literature. 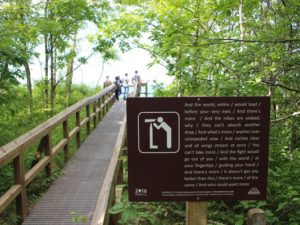