According to librarian Katy Kelly’s blog “on a rare sunny but cool June day in Dayton, Ohio, the University of Dayton Libraries staff competed (and excelled in!) the inaugural Library Olympics. Developed by the professional development team, led by Erik Ziedses des Plantes, the day featured journal Jenga, journal toss, cart racing, book balancing, speed sorting and a scavenger hunt that played out on Twitter.” 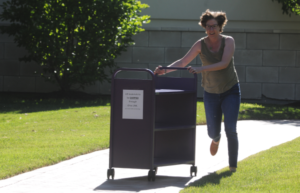 Katy’s first hand report notes that the “competitors exuded speed, strength and cat-like reflexes jumping out of the way when the tenuous towers teetered and fell.”