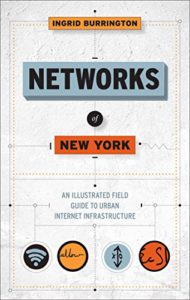 It’s the single most essential aspect of modern life, and yet, for many of us, the Internet looks like an open browser, or the black mirrors of our phones and computers. But in Networks of New York, Ingrid Burrington lifts our eyes from our screens to the streets, showing us that the Internet is everywhere around us, all the time—we just have to know where to look.

Using New York as her point of reference and more than fifty color illustrations as her map, Burrington takes us on a tour of the urban network: she decodes spray-painted sidewalk markings, reveals the history behind cryptic manhole covers, shuffles us past subway cameras and giant carrier hotels, and peppers our journey with background stories about the NYPD’s surveillance apparatus, twentieth-century telecommunication monopolies, high frequency trading on Wall Street, and the downtown building that houses the offices of both Google and the FBI’s Joint Terrorism Task Force.

From a rising star in the field of tech journalism, Networks of New York is a smart, funny, and beautifully designed guide to the endlessly fascinating networks of urban Internet infrastructure.

The Internet, Burrington shows us, is hiding in plain sight.”

“Burrington shows us how to read the subtle clues within the urban landscape that reveal the geography of connectedness—and she helps us understand the political and social implications of this infrastructure. I’ll never look at a telecom manhole cover the same way again.” —Lize Mogel, coeditor of An Atlas of Radical Cartography