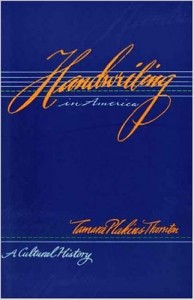 Historian Tamara Thornton wants you to “imagine a world in which the font you use is chosen for you, based entirely on your demographic affiliations. All doctors write in Garamond, while designers are mandated Futura Bold. Middle-aged men get Arial; women, Helvetica. Goofy aunts must use Comic Sans.

Seem strange? A few centuries ago, that was just how things worked” when “penmanship was basically a secret code”, as Ms. Thornton tells us in her book Handwriting in America: A Cultural History.

But there is a whole lot more to the story than that, so feel free to check out “The Hidden Messages of Colonial Handwriting” on the Atlas Obscura website.