ATG Quirkies: Game of Thrones as Depicted in Medieval Manuscripts

ATG Quirkies: Game of Thrones as Depicted in Medieval Manuscripts 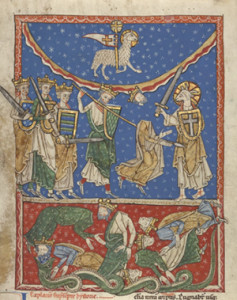 During the last couple seasons of The Game of Thrones, the folks at the Getty IRIS, the online magazine of the J. Paul Getty Museum, have been staying busy. They’ve been having fun recapping each week’s episode with images of medieval art. And then, not satisfied, they added a new twist.  They “included some wildcard images from other museum collections during their recaps, and have written featurettes about ten themes from medieval literature that dovetail with subjects covered by the popular HBO series.”

The result is an impressive array of art touching on themes ranging from alliance and allegiance to the rise and fall of fortune and from violence to the virtue of justice.