This intriguing post comes from the Co.Design website and casts the spotlight on a Harvard Library that continues to play an essential role in protecting the world’s rarest colors.

The story starts with the early efforts of Edward Forbes who is considered the father of art conservation in the United States.  Forbes traveled the world from 1909 to 1944 gathering thousands of color pigments and assembling what is now known as the Forbes Pigment Collection – which he originally intended to use in authenticating classical Italian paintings. 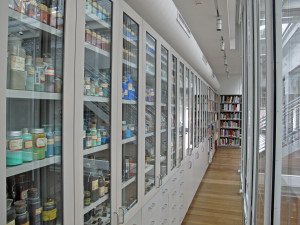 But the story doesn’t stop there. Currently part of the Straus Center for Conservation and Technical Studies at the Harvard Art Museums, the Forbes Collection has been rebuilt by the Center’ s Director Narayan Khandekar and now includes “modern pigments to better analyze 20th century and contemporary art.” It has also proven its value as a forensic tool.  The collection was “instrumental in proving that a Jackson Pollock painting “rediscovered” in 2007 was actually a fake, after pigment analysis revealed that a specific red color was manufactured 20 years after the artist’s death.”

The post also includes a fun “top ten” list “of the rarest and most interesting pigments in the Forbes collection.”

(For more information on the Forbes Pigment Collection checkout Science Of Art Conservation In U.S. Began With One Man’s Collection Of Colors At Harvard)

(A special thanks to our own Leah Hinds for this ATG Quirky.)