ATG Book of the Week: Throwing Rocks at the Google Bus: How Growth Became the Enemy of Prosperity

ATG Book of the Week: Throwing Rocks at the Google Bus: How Growth Became the Enemy of Prosperity 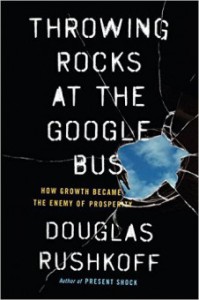 
“The digital economy has gone wrong. Everybody knows it, but no one knows quite how to fix it, or even how to explain the problem. Workers lose to automation, investors lose to algorithms, musicians lose to power law dynamics, drivers lose to Uber, neighborhoods lose to Airbnb, and even tech developers lose their visions to the demands of the startup economy.

Douglas Rushkoff argues that it doesn’t have to be this way. This isn’t the fault of digital technology at all, but the way we are deploying it: instead of building the distributed digital economy these new networks could foster, we are doubling down on the industrial age mandate for growth above all. As Rushkoff shows, this is more the legacy of early corporatism and central currency than a feature of digital technology. In his words, “we are running a 21st century digital economy on a 13th Century printing-press era operating system…”

“Douglas Rushkoff is one of today’s most incisive media theorists and a provocative critic of our digital economy. He’s also fun to read.”
—WALTER ISAACSON, president and CEO, The Aspen Institute, and author of The Innovators

“If you don’t know Rushkoff, you’re not serious about figuring out what’s going to happen next.”
—SETH GODIN, author of Linchpin

“We’ve optimized for growth. But have we lost our way? As an economy? As a community? As a society with a value proposition that doesn’t make sense on a human or economic level? Rushkoff asks questions that matter. A challenging and necessary read.”
—SHERRY TURKLE, author of Reclaiming Conversation

“Every great advance begins when someone sees that what everyone else takes for granted may not actually be true. Douglas Rushkoff questions the deepest assumptions of the modern economy and blazes a path toward a more human-centered world.”
—TIM O’REILLY, founder, O’Reilly Media

“Powerful truth telling… The crux of the argument that Rushkoff makes is that the digital economy is a house of cards built on fictional growth metrics that drive companies to raise money, undercut human workers, sell on the public markets and then—almost inevitably—collapse under the weight of public market demands.”
—Forbes

“A brilliant, bomb-hurling critique of the flaws in our digital economy, identifying what has gone wrong and what can be done about it.”
—Financial Times

“A powerful exposé of an underdiscussed downside to the digital revolution.”
—Kirkus Reviews