Caught My Eye: Accounts from ALA Midwinter, Boston Jan. 8-12.

Caught My Eye: Accounts from ALA Midwinter, Boston Jan. 8-12.

heduling Midwinter early this year, ALA may have dodged a bullet – or at least a blizzard. Had the conference been held a couple of weeks later, as it often is, getting in and out of Boston would have been a nightmare as winter storm Jonas roared up the northeastern corridor closing down airports and making travel almost impossible. But fortunately for the 11,716 librarians, vendors, and library supporters attending Midwinter on Jan. 8-12, the weather behaved. Except for a little rain and some frigid night temperatures, things were manageable by Boston standards. Getting to and from the city was pretty straightforward, and once there, navigating around the conference venues was fairly easy.

Midwinter itself was its usual collection of ALA business meetings,  panel presentations, vendor exhibits, and keynote speakers.  But as always, not everyone who wanted to attend was able to make it so we thought we would try to convey a sense of what went on by sharing a few conference related posts, articles, and a Midwinter video that “caught our eye.” 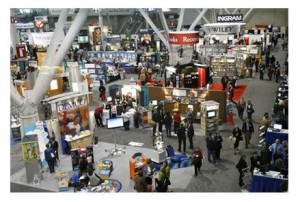 And for those of you who are more visually inclined, this video by ATG’s John Riley captures a few scenes from Boston’s ALA Midwinter that offer a small sample of what was happening, particularly on the exhibit floor.