ATG Quirkies: The Art of the Miniature Book

ATG Quirkies: The Art of the Miniature Book 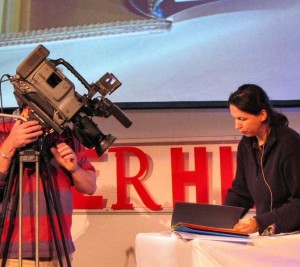 By CvandenHil at Dutch Wikipedia [Public domain] via Wikimedia Commons

Check out this video of distinguished book designer Irma Boom  as she “makes miniature versions of her books in an almost architectural manner. Watch her demonstrate and discuss these unique miniature books, which are among the world’s smallest…”

Ms. Boom is “a Dutch graphic designer, who specializes in book making and is widely acclaimed for their iconoclastic beauty. Boom introduced the idea of a ‘fat book’ (overtly thick book) and has made more than 300 books, 100 of which are in the permanent collection of MoMA in New York…”