ATG Quirkies: “That Went by Fast: My First Hundred Years”

ATG Quirkies: “That Went by Fast: My First Hundred Years” 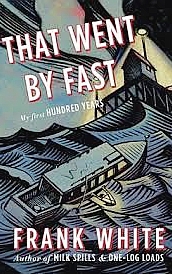 It’s never too late! Frank White, a British Columbia author, published his first book at 99 and added a sequel at age 101.

Frank’s son, the author and publisher Howard White, began tape recording his dad’s reminiscences when he was in his 90’s. The result was two books recounting Frank’s life in rural British Columbia. The first, Milk Spills and One-Log Loads (Harbour, 2013), is “a thoroughly engaging memoir of his time as a pioneer trucker” and the second That Went By Fast: My First Hundred Years (Harbour, 2013), recounts his spirited adventures while living in a “picturesque fishing village on the British Columbia coast.”