ATG Book of the Week: Paper Knowledge: Toward a Media History of Documents (Sign, Storage, Transmission)

ATG Book of the Week: Paper Knowledge: Toward a Media History of Documents (Sign, Storage, Transmission) 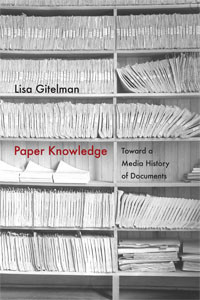 “Paper Knowledge is a … book about the mundane: the library card, the promissory note, the movie ticket, the PDF (Portable Document Format). It is a media history of the document. Drawing examples from the 1870s, the 1930s, the 1960s, and today, Lisa Gitelman thinks across the media that the document form has come to inhabit over the last 150 years, including letterpress printing, typing and carbon paper, mimeograph, microfilm, offset printing, photocopying, and scanning. Whether examining late nineteenth century commercial, or “job” printing, or the Xerox machine and the role of reproduction in our understanding of the document, Gitelman reveals a keen eye for vernacular uses of technology. She tells nuanced, anecdote-filled stories of the waning of old technologies and the emergence of new. Along the way, she discusses documentary matters such as the relation between twentieth-century technological innovation and the management of paper, and the interdependence of computer programming and documentation. Paper Knowledge is destined to set a new agenda for media studies…”

“Lisa Gitelman’s virtuosic excavation of media from the recent past replaces lofty generalizations about ‘print culture’ with a fine-grained sense of different technological and intellectual moments. Her historical narrative has something to teach not just about the past but also about the future, because her reconstructions of ‘job’ printing, microfilm, photocopying, and the PDF add up to a prehistory of what we now call the digital humanities, one that challenges not just received wisdom about the past but the media theory that underpins scholars’ present-day practices.”

(Leah Price, author of How to Do Things with Books in Victorian Britain)

“Gitelman practices a kind of conceptual archeology without obeisance to the master, in an argument that stands well on its own. . . . By the time you reach the book’s final chapter, on the rise of PDF, the relationship between the history of ground-level print culture and that of its Ivory Tower analog seem linked in so many suggestive ways that the advent of digital culture seems like just one part of an intricate pattern.”

“Four intriguing essays make up this tantalising and ambitious short book. . . . The strength of this bold volume is in its argument that we can learn a great deal if we focus, not only on what information they contain but what institutional and social function they serve; not what they’re about but what they do.”

“In this thoroughly media archaeological book, Lisa Gitelman folds media history and discovers its edges by diving deep into the flatland of documents, reading technologies of duplication and dissemination from nineteenth-century ‘job’ printing to today’s PDF. With implications for archival and information science, comparative media, digital humanities, and the history (and future) of texts, Paper Knowledge will be read, referenced, and reproduced—which is exactly what we want our documents to do.”