ATG Book of the Week: Athenaeum Profiles: A Not-For-Profit Education.

ATG Book of the Week: Athenaeum Profiles: A Not-For-Profit Education. 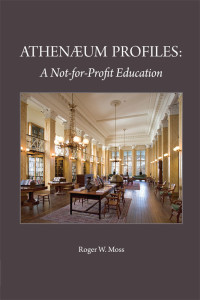 “Prepared for the bicentennial celebration of The Athenaeum of Philadelphia, Athenaeum Profiles consists of biographical essays covering twelve significant individuals who influenced the future of one of America’s oldest cultural institutions. During the author’s forty year tenure as executive director of the Athenaeum (1968-2008), he learned on the job from these men how to manage a not-for-profit special collections library as he resuscitated a moribund institution by acquiring nationally significant collections, attracting substantial funding, embracing modern technology, and creating a research website visited by thousands of researchers from around the globe. How the Athenaeum was pulled back from the brink of collapse provides practical lessons for any curator or director facing a similar situation.