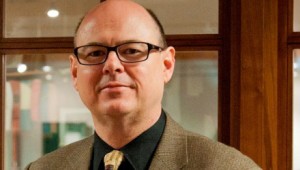 He will succeed Lynn Sutton, who assumed the ZSR library dean helm in 2008 and who became Vice Provost last summer…

Kersh chaired a search committee composed of faculty and administrators that recommended Pyatt’s appointment. Pyatt was born in Charlotte and graduated from West Forsyth High School.

Beyond the allure of returning to North Carolina, Pyatt said that the Z. Smith Reynolds library itself was the main attraction…

Pyatt has served at Pennsylvania State University since 2011, arriving there from Duke University where he was the university archivist in the Perkins Library (2002-2011), associate director of the Rare Book, Manuscript and Special Collections Library (2006-2010), and coordinator of institutional repository services (2010-2011).

Prior to Duke, he was the director of the Southern Historical Collection and Curator of Manuscripts at UNC-Chapel Hill. Pyatt also taught archival administration at UNC in its School of Information and Library Science from 1998 to 2007.

Pyatt has held several elected offices for the Society of American Archivists (SAA), is a past-president of the Society of North Carolina Archivists and was appointed by the governor to serve on the North Carolina State Historical Records Advisory Board from 2000 to 2005. He previously chaired the SAA’s Committee on Ethics and Professional Conduct and is a current member of its governing council. In 2012 he was named a Fellow of the Society for outstanding contributions to the profession…”

According to KnowledgeSpeak “the Association of College and Research Libraries (ACRL) has announced the appointment of Wendi Arant Kaspar to the post of editor for College & Research Libraries (C&RL). Kaspar will serve a three-year term beginning July 1, 2016.

Kaspar will serve as editor designate from July 1, 2015, to June 30, 2016, when she will assume full editorial responsibility. In the position of editor, Kaspar will also serve as chair of the C&RL Editorial Board. She succeeds Scott Walter, university librarian at DePaul University in Chicago, as C&RL editor. Walter will work closely with Kaspar over the next year to ensure a smooth transition.

Kaspar currently serves as policy sciences librarian at the Texas A&M University Policy Sciences and Economics Library, where her duties include working as liaison librarian and subject selector to the Departments of Economics and Political Science as well as the Bush School of Government including International Affairs and Homeland Security. Her extensive publishing experience includes serving as co-editor-in-chief of the Journal of Academic Librarianship (2012-2014) and co-editor-in-chief of Library Leadership & Management (2010-2012).”

King joins RUP from the American Chemical Society (ACS) in Washington, DC, where she was Senior Vice President for the Journals Publishing Group since 2008. She will continue her role as chair of the Board of Directors of CHOR, Inc., a nonprofit 501(c)(3) membership organisation, and its first initiative, CHORUS. RUP is a publisher member of CHORUS, which advances, monitors, and reports on public access to content reporting on funded research.

King has previously served on the Executive Committee of the Professional & Scholarly Publishing Division of the Association of American Publishers, Inc. (AAP). Prior to ACS, she spent 15 years at John Wiley & Sons, where she served in various editorial and management capacities…”

Library Technology Guides reports The Kuali Open Library Environment (OLE) project is pleased to announce the hiring of Heather Beery as the new OLE Project Manager. Heather replaces Patty Mescher, who is retiring after 8 years with Kuali and 2 years as OLE’s Project Manager.

Beery has worked in the Communications office at Indiana University for 5 years as an Information Architect and Assistant Director of the Interactive Design team. Most recently, Heather was the Project Manager for the Kuali User Experience Initiative.

“We are excited to have Heather on board!,” stated OLE Functional Council Chair, Carlen Ruschoff. “She brings a successful background in leadership and team management, as well as a strong background in Rice middleware and user interface development. Her experience working with diverse groups will serve the OLE project well…”