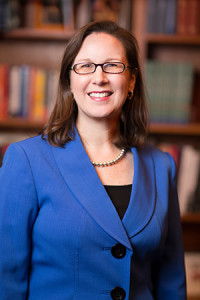 “Columbia University President Lee C. Bollinger today announced his appointment of Ann D. Thornton as the next University Librarian and Vice Provost. Thornton comes to Columbia after almost two decades at the New York Public Libraries, where she is the Andrew W. Mellon Director. The appointment is effective June 1.

“Columbia’s library system is a dynamic academic resource that is at the very core of our teaching and research missions,” Bollinger said. “Ann’s broad experience is ideally suited to the task of harnessing both digital technology and intellectual vision to expand our collections and enhance their long-term value not only to our university, but also to our society.”

Thornton has held a series of senior leadership positions at the New York Public Libraries, spanning the sciences, business, the humanities and social sciences. She has been responsible for collecting, preserving and presenting the institution’s vast collections. She has also helped lead in the areas of electronic resources, reference and research services and public training. Before coming to New York, she was a systems librarian with the University of Houston Libraries…

With direction and guidance from University Provost John Coatsworth and the faculty, Thornton will help integrate the priorities of Columbia’s academic units with the activities of the University libraries. Strengthening channels for student input also will be a focus of their collective efforts.

“Ann is a superb leader and communicator,” Coatsworth said. “She is ideally suited to work with students and faculty, and especially with the newly revived advisory committee of senior faculty to chart the future of Columbia Libraries in a rapidly changing academic and digital environment.”

After earning her bachelor’s degree in English from the University of North Carolina at Chapel Hill, Thornton received her master’s degree in information studies from Florida State University. She has published and spoken widely on the nexus of research, teaching, learning and leadership.

Her tenure at the New York Public Libraries is especially relevant since Columbia and NYPL have well-established partnerships. These include the Research Collections and Preservation Consortium together with Princeton, the country’s largest offsite library shelving facility jointly owned and operated by the three institutions; and book-sharing programs that allow researchers to access the resources of both libraries, as well as that of New York University…”

Lorraine brings a wealth of valuable, highly relevant experience to the position. She has worked for Jisc (The UK Joint Information Systems Committee) since 2002 and was Chief Executive of Jisc Collections from 2006 to 2015. In this capacity she has worked closely with publishers and librarians on all aspects of national procurement and licensing activities. Of particular relevance to COUNTER is her role in setting up the UK Journal Usage Statistics Portal (JUSP), which provides a one stop shop for the management by UK academic libraries of COUNTER usage statistics. In addition to her responsibilities at Jisc, Lorraine has been an energetic participant in wider information industry initiatives and organisations. She is currently Co-editor of Insights: the UKSG Journal.

COUNTER is a multi-agency international initiative whose objective is to develop a set of internationally accepted, extendible Codes of Practice that allows the usage of online information products and services to be measured more consistently…”

According to District Dispatch “the American Library Association (ALA) recently recognized a Washington Office staffer for her successful leadership advocating on behalf of libraries across the country in connection with the FCC’s E-rate proceeding. ALA last week awarded Marijke Visser, associate director of the ALA Office for Information Technology Policy (OITP), the 2015 Staff Achievement Award for her work to push for the Federal Communications Commission (FCC) to make substantial improvements to the E-rate program. Marijke has worked for the ALA for the past six years.

Visser led efforts to advocate on behalf of the public and school libraries that depend on high-capacity broadband to serve their patrons. And her hard work has paid off: In December 2014, the FCC announced that it will add an additional $1.5 billion to the yearly program for libraries and schools. Throughout the multi-year advocacy process, Marijke helped to strengthen ALA relationships with FCC leaders, as evident by the video message FCC Chairman Tom Wheeler released at the 2014 ALA Annual Conference in Las Vegas, as well as FCC Special Counsel Gigi Sohn’s speaking engagement at the same conference. In May 2014, Chairman Wheeler hosted a meeting at the FCC of ALA member-leaders that included ALA President-elect Courtney Young, Public Library Association (PLA) Immediate Past President Carolyn Anthony, Public Library Association Board Member Felton Thomas, and Public Library Association staff member Mary Hirsh…”