ATG Article of the Week: Libraries could outlast the internet, head of British Library says

ATG Article of the Week: Libraries could outlast the internet, head of British Library says

A recent post from the Telegraph, offers director of the British Library, Roly Keating’s take on the continuing value of libraries. Addressing naysayers who question the viability of libraries in the digital age, Mr. Keating has the audacity to think that Libraries could outlast the internet and prove the most “powerful and resiliant network yet”.

The article written by Arts Correspondent, Hannah Furness, reports on comments made by Mr. Keating at the Hay Festival.  In discussing his team’s plans for the next few years, he noted that “libraries held a vital place in communities, and were increasingly important in terms of authentic information in the digital age… Mr Keating continued extolling libraries pointing out that “they stand for a certain freedom, and privacy of thought and search and expression,” he said of libraries. “They stand for private study in a social space… they are safe, they’re places of sanctuary and play a vital role in some of the poorest communities. And they are trusted.” 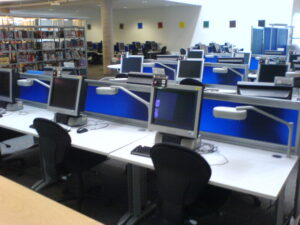 By Markpeak (Own work) [CC BY-SA 3.0], via Wikimedia Commons