ATG Quirkies: The Most Secretive Book in History?

ATG Quirkies: The Most Secretive Book in History?

Any guesses? Well a recent post on the Mental Floss website by Erin McCarthy, provides a pretty good candidate. The Most Secretive Book in History recounts the story of the Voynich Manuscript, a strange text discovered by London-based book dealer Wilfrid Voynich in 1912. The article describes it as “a bizarre medieval manuscript written in a language no one can read” that “has baffled the world’s best cryptologists, stumped the most powerful code-breaking computers, and been written off as a masterful hoax.”  But that just for starters.

Fortunately, Ms. McCarthy’s post recounts the full story – at least up to now! Check it out. It’s well worth the read! 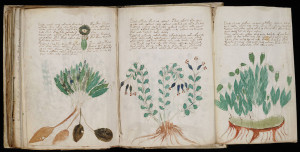 (The source of ATG Quirkies is John Riley of Gabriel Books)