ATG Book of the Week: New Roles for the Road Ahead: Essays Commissioned for ACRL’s 75th Anniversary

ATG Book of the Week: New Roles for the Road Ahead: Essays Commissioned for ACRL’s 75th Anniversary 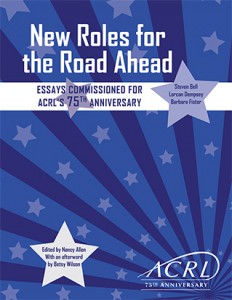 ACRL commissioned this series of twenty essays by three librarians from different sectors of the profession for its 75th anniversary to look at the changing nature of academic libraries. ACRL members provided commentary on the draft of the report, much of which was incorporated into the final work. The essays, now freely available on the ACRL website, include reflections on ways academic libraries can succeed in a changing higher education environment, take advantage of opportunities, and think about the best ways to deliver both ongoing and innovative services to students and faculty. The collection includes the authors’ thoughts on the world in which academic libraries will thrive, ways libraries are responding to change, and new roles for libraries and librarians.

The authors will discuss the essays at the ACRL 2015 conference in Portland, Oregon during the ACRL 75th Anniversary Invited Panel on 26 March from 3:00-4:00 p.m. in the Oregon Convention Center, Portland Ballroom 251/258. Join them and moderator Chuck Henry, President, Council on Library and Information Resources, for a lively conversation about what new roles academic librarians might take on to shape a sustainable higher education landscape, informed and enriched by enduring library values.