ATG Book of the Week: The Biographical Dictionary of Literary Failure

ATG Book of the Week: The Biographical Dictionary of Literary Failure 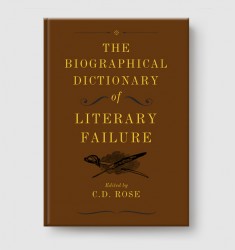 
A signal event of literary scholarship, The Biographical Dictionary of Literary Failure compiles the biographies of history’s most notable cases of a complete lack of literary success. As such, it is the world’s leading authority on the subject.

Compiled in one volume by C. D. Rose, a well-educated person universally acknowledged in parts of England as the world’s pre-eminent expert on inexpert writers, the book culls its information from lost or otherwise ignored archives scattered around the globe, as well as the occasional dustbin.

The dictionary amounts to a monumental accomplishment: the definitive appreciation of history’s least accomplished writers. Thus immortalized beyond deserving and rescued from hard-earned obscurity, the authors presented in this historic volume comprise a who’s who of the talentless and deluded, their stories timeless litanies of abject psychosis, misapplication, and delinquency…

“Rose writes with wit, playfulness and an impressive knowledge… An author to reckon with, one whom Borges and Max Beerbohm would have admired… We haven’t heard the last of C.D. Rose.”
—Washington Post

“Nuanced… Though the vignettes are fictional, most are entertaining and all could serve as warnings to anyone thinking of taking up the literary life.”
—Wall Street Journal

“An anthology that cleverly calls out the ways in which we dramatize—and idolize—the lives of authors, successful and not.”
—Huffington Post