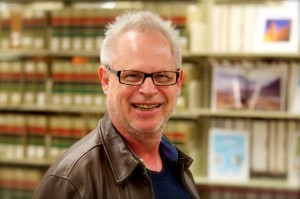 Underneath any grump is a kid. And that kid is as likely an Eric Cartman or Groucho Marx. I’ve no doubt Hanks will get future roles that Jack Lemmon or Walter Matthau would have played had there not been something like life in the way—the ultimate analogue.

Hanks also can play Dads well. Dad who fixes things—toys and hearts. One of his first roles, as the boy in Boy defined his role forever—the kid in the man, the man in the kid.

In the rolling playing field of Apple App Store competition, Hanx Writer, an app developed by Hitcent.com with help from Hanx has shot to a top slot in app downloads. Hanx Writer is a word processing app modeled after classic portable mechanical typewriters. A moment at the app’s website whisks you into an elegant world that just feels like another era. The first page, against all black background, is the actor’s neat signature in white. Swipe and you are entertained with the who, what, and why of Hanx Writer.

Hanks collects typewriters. At one point he owned over 200. Hitcent.com and Hanx have selected three prototypes that model functions and features of real portables. Through 3D modeling and a good amount of thought of what should an Apple app look and feel like to allow an experience of another era’s keyboards?

The basic app is free; for 2.99 you upgrade to two additional typewriters. The keyboards are virtual looking as much like the real item. The sounds I imagine were recorded and sampled. Carriages move back and forth as if you were typing a first term paper.

It’s a mouthful to describe what features of real app and real typewriter are retained. Let’s say you can have fun writing notes and short correspondence. At Starbuck’s you can imagine yourself Hemmingway, finishing an article while drinking a Vente Latte. The kid in Hanks comes out when he described Hanx Writer as something to annoy cappuccino drinkers with. That’s the kid in Hank’s and all of us, looking to the past for a pleasurable moment.

Just one tiny, half-key stroke issue with the cultural point of Hanx Writer. The virtual typewriters carry the Hanx Writer brand. They look familiar to other iconic brands like Underwood, Olivetti, Royal, Olympia, but they are not replications. They are virtual mash-ups using 3D software and hardware.

The homage would not be possible without Tom Hank’s collection, itself a museum of objects. These objects are preserved by collectors like Hank’s. Perhaps the companies themselves linger in some analogue form in the physical world. This is a world of inventions with patents and trademarks. The objects themselves played a huge role in making the virtual world that Hanx Writer appropriates to honor and have fun.

Those of us who cut our writing teeth on real typewriters instinctively mourn the loss in each tap on Hanx Writer. Those who never really typed must instinctively invoke baby boomer at every noisy carriage return disturbing the caffeine buzz at the local bistro. Hanx Writer is a free download at the Apple Store. For $2.99 you get two more typewriters. So far, no Android version.

(If you’re interested in more about the Hanx app check out this article by John Brownlee at FastCo that we posted as an ATG Quirky in August.)

*email your answers directly to Dennis Brunning at dennis.brunning@gmail.com