ATG Book of the Week: Collecting Shakespeare: The Story of Henry and Emily Folger

ATG Book of the Week: Collecting Shakespeare: The Story of Henry and Emily Folger 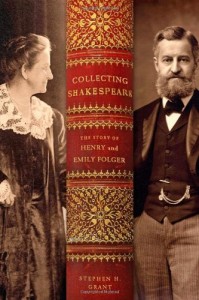 In Collecting Shakespeare, Stephen H. Grant recounts the American success story of Henry and Emily Folger of Brooklyn, a couple who were devoted to each other, in love with Shakespeare, and bitten by the collecting bug.

Shortly after marrying in 1885, the Folgers started buying, cataloging, and storing all manner of items about Shakespeare and his era. Emily earned a master’s degree in Shakespeare studies. The frugal couple worked passionately as a tight-knit team during the Gilded Age, financing their hobby with the fortune Henry earned as president of Standard Oil Company of New York, where he was a trusted associate of John D. Rockefeller Sr.

While a number of American universities offered to house the collection, the Folgers wanted to give it to the American people. Afraid the price of antiquarian books would soar if their names were revealed, they secretly acquired prime real estate on Capitol Hill near the Library of Congress. They commissioned the design and construction of an elegant building with a reading room, public exhibition hall, and the Elizabethan Theatre. The Folger Shakespeare Library was dedicated on the Bard’s birthday, April 23, 1932.

The library houses 82 First Folios, 275,000 books, and 60,000 manuscripts. It welcomes more than 100,000 visitors a year and provides professors, scholars, graduate students, and researchers from around the world with access to the collections. It is also a vibrant center in Washington, D.C., for cultural programs, including theater, concerts, lectures, and poetry readings.

The library provided Grant with unprecedented access to the primary sources within the Folger vault. He draws on interviews with surviving Folger relatives and visits to 35 related archives in the United States and in Britain to create a portrait of the remarkable couple who ensured that Shakespeare would have a beautiful home in America.

This book will fill a major gap in our understanding of how one of America’s most influential institutions came to be, and it will be welcomed by what the 1623 Folio describes as a ‘great Variety of Readers.’ (John F. Andrews, President, The Shakespeare Guild)

This charming and compelling tale of a literary obsession brings the Folgers back to life and serves as an important reminder of the incredibly rare and rich resources that lie hidden in the Folger Shakespeare Library. (Debby Applegate, author of the Pulitzer Prize-winning The Most Famous Man in America: The Biography of Henry Ward Beecher)

Grant provides not just a biography of the ‘onlie begetters’ of this astonishing library, but also an account of the worlds in which the Folgers lived. The result is a superlative book… Crisply written and packed with facts and anecdotes. (Michael Dirda Washington Post)

This thoroughly researched and accessibly written book is first of all a fascinating biography of how a man and his wife devoted their lives to gathering the world’s largest collection of the original folios of William Shakespeare, plus a range of literature from as early as 1500. It is also a meditation on why some museums endure and thrive, while others lapse into confusion and decay. (James Srodes Washington Times)