ATG Book of the Week: Collecting, Curating, and Researching Writers’ Libraries: A Handbook

ATG Book of the Week: Collecting, Curating, and Researching Writers’ Libraries: A Handbook 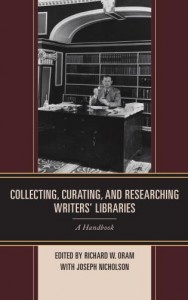 “Academic collection practices in recent years have extended to the private libraries of notable individual authors. As a consequence, book historians have become more interested in the study of provenance of the contents of these libraries, while literary scholars have devoted more attention to authorial annotations. At the same time, the Internet has encouraged both scholarly and hobbyist reconstructions of private libraries (see, for example, the “Legacy Libraries” on Librarything.com). Although there are many bibliographies and reconstructions of the libraries of authors, this is the first general consideration of these libraries and serves as an introduction to best practices for academic libraries in their acquisition, cataloging and issues of access.

This collection begins with principal editor Richard Oram’s historical overview of writers’ libraries and institutional collecting, focusing primarily on English-language authors. The co-editor, Joseph Nicholson, has provided a definitive review of best cataloging and arrangement practices that facilitate scholarly access. The bookseller Kevin Mac Donnell discusses the marketing of these collections and obstacles to placing intact author libraries in institutions. Also included are case studies by Amanda Golden and David Faulds relating to the personal libraries of the poets Anne Sexton and Ted Hughes, indicating how these collections have the potential to enhance archival research. Fiction writers Iain Sinclair, Russell Banks, Jim Crace, poet Ted Kooser, and biographer Ron Powers describe their (sometimes passionate) relationship with books and their own personal libraries. The concluding chapter, a location guide to over 500 individual libraries, will be invaluable to scholars and librarians who want to know where writers’ libraries are currently located, what happened to them (if they are known to have been sold or dispersed), and what has been written about them.”

“A collection of essays on this topic is a great idea, and its time is due! Authors’ libraries are rich sources of information for literary scholars, and archival and curatorial strategies raise their own interesting sets of questions about such libraries and about institutional practices. As the first work of its kind, this will be a collection to look forward to.”  – Cristanne Miller, Edward H. Butler Professor of English and Chair of the Department at the University at Buffalo in New York