Head In the Clouds: 100% PDA and No Approval Plan

Head In the Clouds: 100% PDA and No Approval Plan 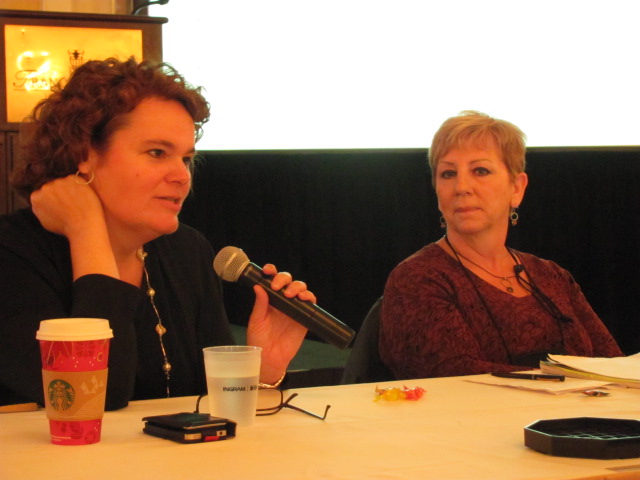 Bucknell University, a private liberal arts college in central Pennsylvania, was an early adopter of OCLC WorldShare.  WorldCat is their catalog and discovery interface.  The library has eliminated its approval plan and moved to an entire patron-driven access (PDA) model for acquisitions.  They were very happy with their approval plan but it was not effective: they were buying 12,000 books a year (more than 70% of them on an automatic approval plan) and weeding 6,000.  Some books sat on the shelf and were never circulated.  When they began buying many books as a direct result of patron requests, they decided to abandon the approval plan.

They surveyed faculty, who were very supportive and said it was more reasonable than the approval plan and would identify books that were actually used (if only once!).  They were concerned about the collection being balanced, running out of money, and students ordering inappropriate books.  They also wanted the library to continue vetting book purchases. 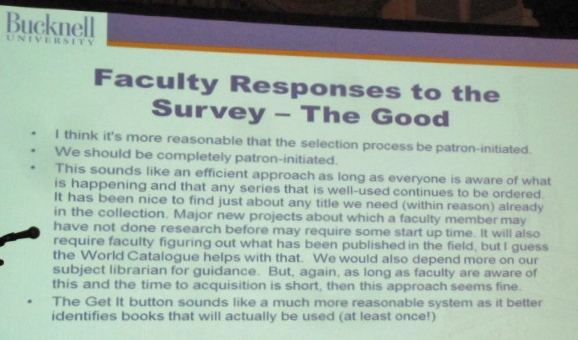 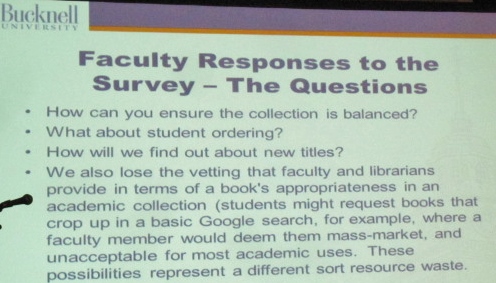 In reality, all ordering is PDA, even if it is based on reviews by faculty or librarians.  All of the PDA requests are vetted by the Collection Development librarian.  About 30 new requests per day are received;  some are no-brainers, and others need reviewing.  Vetting the requests helps the librarians remain aware of what is going on in the academic departments on a daily basis.  A series of meetings with the faculty addressed some of their concerns.

When a patron retrieves a book record on WorldCat and the library does not own the book, a “Get It” button appears. When the user clicks on that, a request goes to the back-end processor (Iliad) and is reviewed.  The user can opt to have the book bought or borrowed on ILL, and then the decision is made and routed to the acquisitions department, sent to ILL, etc. 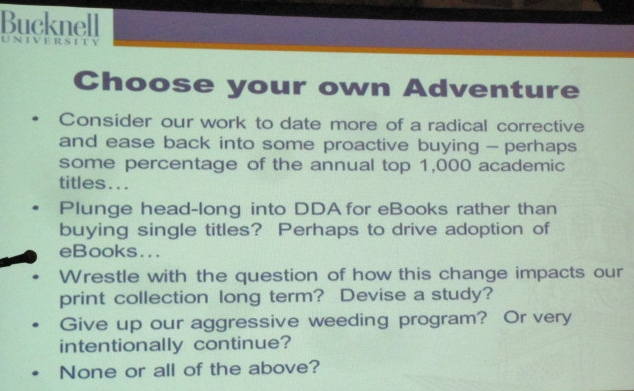 All book orders are now processed through PDA, including both print and e-books.  The library staff wonders if there some things that should be bought proactively?  Some programs may be more appropriate to do this for than others.