ATG Book of the Week: Smart Machines: IBM’s Watson and the Era of Cognitive Computing

ATG Book of the Week: Smart Machines: IBM’s Watson and the Era of Cognitive Computing 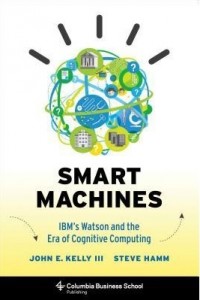 “We are entering a new frontier in the evolution of computing: the era of cognitive systems. The victory of IBM’s Watson on the television quiz show Jeopardy! signaled the advent of this new era, revealing how scientists and engineers at IBM and elsewhere are pushing the boundaries of science and technology to create machines that sense, learn, reason, and interact with people in new ways.

In Smart Machines, John E. Kelly III, director of IBM Research, and Steve Hamm, a writer at IBM and a former business and technology journalist, introduce the fascinating world of “cognitive systems” to general audiences and provide a window into the future of computing… Kelly and Hamm’s comprehensive perspective describes this technology inside and out, and their extensive knowledge illuminates the difficulty of harnessing and understanding “big data,” one of the major computing challenges facing technicians in the coming decades. Absorbing and impassioned, their book will inspire governments, academics, and the global tech industry to work together to power this exciting wave in innovation.

“If you think the tidal wave of digital disruption is over, think again. Kelly and Hamm pull back the curtain on the next great wave of the computing revolution, which will transform how every industry and business operates in the near future.” – David Rogers, author of The Network Is Your Customer: Five Strategies to Thrive in a Digital Age)

“As Watson’s win against Jeopardy! champion Ken Jennings showed, IBM’s research labs are doing some of the world’s most revolutionary research in artificial intelligence and related fields. In this short and very accessible book, the authors outline this work and the wave of ‘cognitive computing’ that is about the break.” – James Hendler, Rensselaer Polytechnic Institute

“This book will give the careful reader an understanding of the immense possibilities offered by the intelligent collaboration of man and machine; armed with this knowledge, readers can then tackle the difficult but essential task of ensuring that these new cognitive technologies will, in practice, be devoted to bettering our lives.” – Ralph Gomory, Stern School of Business, New York University)

“Technological change, from new materials to smart systems, is accelerating, and the latest advances fuel others. John E. Kelly and Steve Hamm show how these technologies will transform our jobs, our cities — even how we think.” – Stephen Baker, author of Final Jeopardy: Man vs. Machine and the Quest to Know Everything

“IBM’s Watson is one of the most important technological breakthroughs in decades, and this is the go-to book for understanding what this new technology is all about and how it will change your life.”  – Tyler Cowen, George Mason University, author of Average Is Over