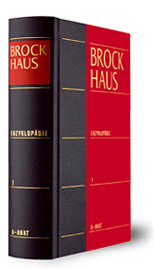 At the end of spring, Bertelsmann, the Hulk of global publishing houses, announced the end of the BrockHaus encyclopedia brand.  We’re not shocked;  we are used to closings.  Is the enlightenment which BrockHaus so carefully documented over?

As Christopher Caldwell explained in his excellent Financial Times comment on the BrockHaus passing, the publication itself wasn’t to blame.  It never stopped improving its research, style, clarity.  Unfortunately, it simply wasn’t Wikipedia which Der Stern in an editorial study found more accurate and more informative — at least compared to the German edition of Wikipedia.

Mostly though, it was Wikipedia’s up-to-date and immediacy that won its grand credit from a nation that created higher education and its reference and annotating the known world.

Yes, Wikipedia and its medium, the Internet, got the plug pulled on the BrockHaus Encyclopedia just as it has disrupted the Encyclopedia Britannica and the Grand Robert.  Even though Wikipedia can get it wrong and rights itself only through a prolonged crowd-sourced editing, it was free and easily served across all search engines with the “answer solution.”  Wikipedia thrives in the early results of just about any Google search where the print commercial encyclopedias couldn’t afford to be even in digital form.

You got to feel a little bit sorry for the encyclopedia makers.  They threw lots of time and money into quality research only to have it pinched, re-phrased, and posted as emerging ex nihilo from the brains of the Wikipedians.  On the other hand, how could the Web get such a reputation to settle bar bets, pre-diagnose your symptoms, and keep us in sync, 24/7 with the popular culture?

The least Wikipedia could do, just before the trucks take all the BrockHaus volumes to storage, the shredder, or book sales, scan that data and run it as check against the fact and fable so ridiculously flaunted everywhere in Wikipedia, on Google, and now in our collective error-seized minds?  And Googlers, at least give credit to the real shoulders you stand on as a knowledge medium.

Link to Caldwell’s column in FT.com. Sorry, you may need to register or pay…

You clearly don’t know who you’re talking to, so let me clue you in.  I’m not in danger…I am the danger.  A guy opens his door and gets shot…I’m the one who knocks. — Walter White, Breaking Bad

About everything of substance linked for me by my email buddies, my Facebook friends, my listserv colleagues, Twitter followers — you know, my online peeps — refer me to discursive links that churn daily on the open Internet.  This places my brain at a certain disadvantage of not directly knowing what it knows about the world that spreads out from the epicenter of me.  It’s like choosing dessert all the time from a fridge stored with endless food.  It’s not a good diet.

We live in this hype and hive engine which feeds us all sorts of opinion, mashed fact and fiction, and pure sales pitch.  As we click on our friendly links the other end anchors itself in our online lives and adds to the links we should not click and, once clicked, read and, once read, comment on.

Also, it is putting our world of quality information out of business.  We can no longer humanly provide filtering or gateways.  We can’t even control the tsunami of stuff that influences us, let alone our users.  And it’s all pure sucrose, absorbed and burned in our brains leaving nothing but frenetic energy consumed.

We can’t blame this all on spammers and the spammer ethos and practice.  To survive in the Internet world of dwindling ad fees, stolen traffic from content farms, severely reduced circulation and consequent laying off anyone to run a decent newspaper or magazine, once esteemed newspapers like the New York Times have become the major data collectors, setting their cookies, collecting our keystrokes, and selling our reading habits to market companies.

Despite the renewal of subscriber pay walls for “premium” content, all consumer-directed publications host free blog sites where they attract our attention and our inevitable sending of this “faux” journalism to others.  Let’s face it, our favorite library publications are playing both sides for survival — can’t blame them for that — but it does call into question our ability to host them as quality library resources in the old way of thinking.

Yes, much of “our” content is breaking bad.  And we are opening the door both in our own online habits and in leading our customers right into the same thing.

Annals of Search:  What You Don’t Know or Ask For Can’t Hurt You

Google, or as we know it, the Worldwide Web, has a communication problem.  No, not the communication problem you try to fix to be more popular.  They have the cute message, the snap and whoops, of system failure down to Sesame Street-like gossamer — all the while deflecting that it ain’t working.  They can be direct too, from the well-crafted anonymity of a message that states new policy or product support.  Just ask Google Reader users how deftly Google ended that service.  It was like taking a band-aid off your child — a flip of the wrist, and it’s off.  Replace the ouch with some ice cream.

And who can chuckle, smile, move the inner happiness arrow just a smidgen at the sight of a new doodle?  Who comes up with these, sprites?

No this display communication or press statement they own.  They aren’t at all like Facebook, who can’t elevate the cute to a good corporate style.

What Google doesn’t seem to be able to do is to align communication of whom they are and what they do to their presentation of self in everyday life.  Notice the weasel speak and the radar jamming clutter of their legal statements.  I guess there is no way to doodle over their Prism portal or their recent success at restructuring stock to a novel three-level structure that removes shareholder votes. How do you doodle that fact that you now run the Internet?

Recent stealth communication efforts by those running Google Scholar should come to light.  Let’s doodle a little on it.

Over the last year or two we’ve heard that Anurag Acharya, Google’s Lead Engineer for Google Scholar, has asked to speak at our gatherings.  He was in Charleston last November and in Toronto, at ICOLC, in April this year.  He talks in a soft voice about Google Scholar — its development, its challenges — and adapts the message a little to the audience.  The take home message is that Google Scholar dominates the search and finding of library content.  What it can’t achieve across the continuum of users is access to the full text.

A few years ago, Anurag Acharya emphasized the solution was a combination of using link resolvers and the evolving acceptance of open access.  In fact, achieve 100 percent success at the latter and the problem of Google Scholar being THE knowledge engine is assured.

Unlike a doodle that can only make us smile, Anurag Acharya found that the access nut is hard to crack because of real-world obstacles.  He found that even commercial OpenURL resolvers didn’t work as well as hoped and that many libraries could not afford to run them.

What he proposes now — what he wants — is for libraries to convince publishers to provide complete subscriber lists to Google with accurate IP ranges associated with access rights.  This way Google can figure out who gets what and link them successfully.

Frankly, this is a mouthful and a handful. Librarians have created robust link resolvers to facilitate proper access for their users and to manage this connection.  We want to be part of the process.  What Anurag Acharya is suggesting is that only two agents in a four-stakeholder relationship managed the shebang.

Even more, Anurag Acharya’s approaching the profession one-on-one to build a grassroots movement may not be in our best interest.

At the Charleston Conference Katina Strauch and I met briefly with Anurag Acharya to delve deeper into his views.  He agreed to answer some questions by email that were to be published in either The Charleston Advisor or Against the Grain.  George Machovec, Managing Editor, and I came up with some direct yet simple questions for him.  Despite follow-up emails, he never answered.  I’m attaching the questions for your amusement and to communicate to you and to Google Scholar what we might want to know and that we certainly want to promote communication.

No doodle at the moment for this.

BTW, here are the questions.  Hey, Anurag, feel free to doodle away, you got my word I’ll put them out in the cyber sphere. — DB

1.  Who came up with the concept behind Google Scholar and how did it get initiated in the company as a whole?

2.  It appears that Google Scholar has a slightly more hidden presence in the Google family of products.  Can you explain how it is positioned?

3.  Google Scholar has worked with link resolver companies for many years to allow proper linking between the user and subscription-based content.  Can you explain your thinking on how to improve this process, particularly for libraries that may not have link resolvers?

4.  Who should a library contact if they want to work with you on improving the access to full-text with Google?

5.  The “preferences” option to allow a user to identify their library affiliation if they are not inside the IP domain of their local institution is hard to find.  Can anything be done to make this more obvious in Google Scholar?

6.  What do you see as the future of Google Scholar?

7.  How would you compare and differentiate Google Scholar from Microsoft’s Academic Search?  Who else do you view as a competitor?

8.  Why doesn’t Google Scholar have an API to allow syndication of GS content into other apps or interfaces?

9.  You propose that libraries collectively demand complete and accurate subscription lists and IP ranges from publishers.  Presumably, this is what most of us already get from publishers to run our link resolvers.  Ideally, resolving from Google Scholar should work equally well.

10.  If you get agreement and cooperation from publishers, would Google Scholar actually be managing a universal link resolver for libraries?  Could libraries then add a Microsoft Academic as a source database to that universal resolver?

12.  Eric Schmidt, former Google CEO and now Chair, famously stated that Google’s goal of indexing all published knowledge would take 300 years and may not completely achieve the goal as stated.  Where is Google Scholar in indexing scholarly and scientific knowledge?