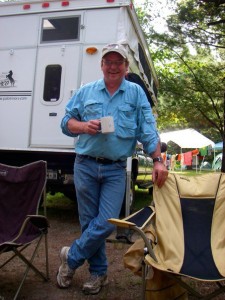 Professional Career and Activities: I have worked in the ILMS industry for Gaylord Brothers back in the Galaxy days, public libraries, academic libraries and NY State Court Libraries (Appellate Division, 4th Department).

Family: My wife Jan is the Associate Director of the H. Douglas Barclay Law Library at the Syracuse University College of Law. Our Daughter is studying to be an environmental engineer, and our Son is studying computer programming.  Two dogs, (a lab and a golden retreiver)

In My Spare Time: I enjoy carpentry, fly fishing, fly tying, cooking, camping, gardening, and am an avid reader

Favorite Books: All time favorite is The Stand by Stephen King  Best reads this past year so far: The Swerve by Stephen Greenblatt.and Hillary Mantel’s Wolf Hall and Bring Up the Bodies

Philosophy: Never make a promise you can’t keep, and never make a threat you aren’t willing to carry out.

How/Where Do I See the Industry in Five Years: That really depends on whether or not we recognize the challenges ahead and plan for them appropriately.  There isn’t enough evidence either way to make a prediction on that.