ATG Book of the Week: Good Prose: The Art of Nonfiction

ATG Book of the Week: Good Prose: The Art of Nonfiction 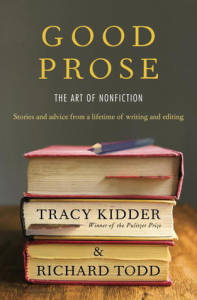 “Good Prose is an inspiring book about writing—about the creation of good prose—and the record of a warm and productive literary friendship. The story begins in 1973, in the offices of The Atlantic Monthly, in Boston, where a young freelance writer named Tracy Kidder came looking for an assignment. Richard Todd was the editor who encouraged him. From that article grew a lifelong association. Before long, Kidder’s The Soul of a New Machine, the first book the two worked on together, had won the Pulitzer Prize. It was a heady moment, but for Kidder and Todd it was only the beginning of an education in the art of nonfiction.

Good Prose explores three major nonfiction forms: narratives, essays, and memoirs. Kidder and Todd draw candidly, sometimes comically, on their own experience—their mistakes as well as accomplishments—to demonstrate the pragmatic ways in which creative problems get solved. They also turn to the works of a wide range of writers, novelists as well as nonfiction writers, for models and instruction. They talk about narrative strategies (and about how to find a story, sometimes in surprising places), about the ethical challenges of nonfiction, and about the realities of making a living as a writer. They offer some tart and emphatic opinions on the current state of language. And they take a clear stand against playing loose with the facts. Their advice is always grounded in the practical world of writing and publishing…”

“Good Prose mixes memoir and instruction, with sections written from the writer’s perspective, sections written from the editor’s, and sections written together. While unconventional, this structure doesn’t feel disjointed. You are in such good company—congenial, ironic, a bit old-school—that you’re happy to follow them where they lead you. Reading their chapter on narrative structure, you know they’ve put careful thought into how to organize the book. . . . Kidder and Todd articulate sturdy general principles and useful techniques, without ever being didactic. Some of their choicest bits of advice are dispensed as aphoristic bits of wisdom.” —The Wall Street Journal

“Legendary literary journalist Kidder and his longtime editor trade war stories and advice for the ambitious nonfiction writer . . . an entertaining handbook on matters of reporting (do lots of it, much more than you think you need) and style (simpler is better) . . . Other writing guides have more nuts-and-bolts advice, but few combine the verve and plainspokenness of this book, which exemplifies its title.”—Kirkus Reviews (starred review)

“A comprehensive, practical look at the best practices of professional nonfiction writers and editors . . . anecdotes and close readings throughout the text are an excellent resource for would-be writers of any prose genre.”—Publishers Weekly

“[Kidder and Todd] share their dedication to“good prose” and expertise in creating it with warmth, zest, and wit in this well-structured, to-the-point, genuinely useful, and fun-to-read guide to writing narrative nonfiction, essays, and memoir … [they] also offer some of the most lucid, specific, and tested guidance available about technical essentials, from determining what makes a good nonfiction story to choosing a point of view to achieving accuracy and clarity … Kidder and Todd’s book about strong writing is crisp, informative, and mind-expanding.”—Booklist