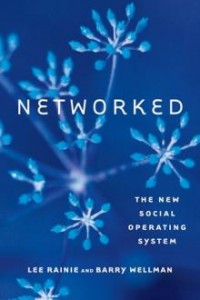 “In Networked, Lee Rainie and Barry Wellman show how the large, loosely knit social circles of networked individuals expand opportunities for learning, problem solving, decision making, and personal interaction. The new social operating system of “networked individualism” liberates us from the restrictions of tightly knit groups; it also requires us to develop networking skills and strategies, work on maintaining ties, and balance multiple overlapping networks. Rainie and Wellman outline the “triple revolution” that has brought on this transformation: the rise of social networking, the capacity of the Internet to empower individuals, and the always-on connectivity of mobile devices…”

“Lee Rainie and Barry Wellman have combined forces to become the new Marshall McLuhan! They draw on years of observation to weave the threads of the online and offline worlds into a deeply colored tapestry. We can see emergent social norms arising from their moving stories and insightful analyses.”–Vint Cerf, Internet Pioneer

“Lee Rainie and Barry Wellman have woven three enormous changes in the ways we connect–the spread of the internet, mobile tools, and social media–into a single clarifying story of our present and future life in the 21st century.”–Clay Shirky, author of Cognitive Surplus and Here Comes Everybody

“Just as I would not let my child loose in traffic before I taught her to look both ways, if it were up to me, nobody would be let loose online until they read Networked. From the stories of real people whose lives have been changed, often for the better, by their interactions with contemporary online social networks, to the sociological and psychological theories that explain how life is really changing in the age of ‘networked individualism,’ this is a must-read manual for life online today.”–Howard Rheingold, critic and author of Net Smart, Tools for Thought, The Virtual Community, and Smart Mobs

“The Pew Internet Project has been part of America’s tech landscape for nearly as long as Google has, and five years longer than Facebook. Through that time it has earned respect and attention for its careful, systematic studies of the ways in which networked connectivity is changing some daily patterns of commercial, educational, and social interactions–and the other long-standing human patterns it had reinforced. In Networked, the Project’s leader, Lee Rainie, and his co-author Barry Wellman build on that analysis to explain what we already know about technology’s impact on our lives, what we can see coming, and where the biggest surprises and uncertainties still lie.”–James Fallows, national correspondent and technology analyst for The Atlantic