ATG Article of the Week: Wars of Words: The story behind the stories about Webster’s Third

ATG Article of the Week: Wars of Words: The story behind the stories about Webster’s Third

Wars of Words: The story behind the stories about Webster’s Third

Anyone interested the history of American English and the reference works that have helped transform it will be glad to see this review of David Skinner’s new book The Story of Ain’t: America, Its Language, and the Most Controversial Dictionary Ever Published (Harper; 9780062027467; $26.99).

Appearing in the Weekly Standard and written by Joseph Epstein, the review set the stage for a full discussion of the book by acknowledging the harsh criticism, the linguistic battles and the continuing controversy engendered by publication of W3.  As Epstein notes, W3 represents a break from the tradition of a dictionary providing proscriptive judgements on the appropriateness of words to a reference book offering an “egalitarian and descriptive” approach to a living language.  Skinner’s book recounts the full story with its numerous twists and turns and includes the “leading players—lexicographers, linguists, critics, publishing executives—and their radically differing points of view” in what Epstein calls “a lively account of a subject of interest to anyone concerned about the English language in America.”

After reading this review one is left agreeing with Epstein’s conclusion that “the Webster’s Third New International Dictionary, Unabridged, for all its flaws, may be the last great general dictionary we shall ever see” – and of course wanting to read the book. 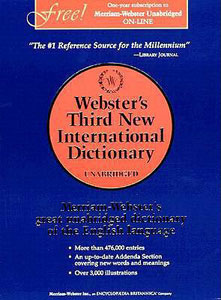