The Long Arm of the Law

The Long Arm of the Law 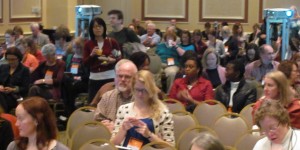 Libraries need consistent international copyright terms, along with legal provisions known as “limitations and exceptions” that provide a balance between owners and users of protected works.  IFLA has been working with the World Intellectual Property Organization (WIPO) on a Treaty For Libraries (TLIB) to elucidate these terms.

Why do we care about this treaty?  The treaty was sposored by IFLA, and we care because it is all about information.  IFLA assumes a responsibility, both to the producers of intellectual property (IP) and to libraries as representatives of information users.

What are we doing?  (Many of the slides relating to this effort can be seen at this IFLA site.) This effort has been underway since 2004 The Access to Knowledge (A2K) Treaty was issued in 2005.  Librarians urge that the costs and benefits of IP right should be weighed and thought of as a means, not an end, for innovation, creativity, and technical development.

We have much to be thankful in the U.S. for our advanced stand on IP issues, which is not the case in many countries.  An important paper onexceptions  to copyright for libraries was issued, fofllowing which IFLA issued its own statement in May 2009.  The Treaty For Libraries (TLIB) was drafted in 2011.

What do we want to have happen?  The articles of the Treaty list a number of issues important to libraries, some of which are:

Proposals concerning libraries have been received, and several member states proposed “clusters” of topics and new topics to add.  One of the most significant additions proposed was the right to translate works.

What next?   In April 2014, it is expected that the final text of the treaty will be finalized.

Amazon began selling eBooks for $9.99, to which the publishers objected and filed suit in 2009.  The government investigated because of price fixing considerations, asserting that there was collusion between publishers and Apple.  In April 2012, Apple and 5 other publishers were sued for for conspiring to fix the resale price of e-books, in violation of the Sherman Antitrust Act.  Three of the publishers settled with the Department of Justice, and Apple and hundreds of individuals urged the court not to accept the settlement.  However, in September 2012, the court did approve it.

Will the Apple case affect libraries?  Libraries don’t buy trade books from Amazon, and not all publishers allow eBooks to be sold to libraries.  Trade books to be used for circulation are distributed differently and are more expensive.  Pricing to libraries may or may not change.

Hannay sang a song with the lyrics shown below as a parody of this case. 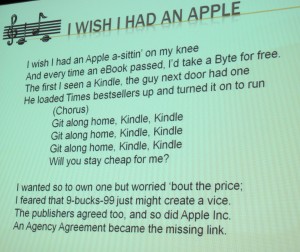 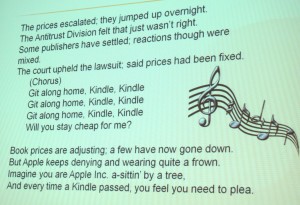 Kirtsaeng noticed that prices  in Thailand for books used in his classes were considerably less than in the U.S.  He asked his friends to ship copies of the books to him from  Thailand and sold them for a profit on eBay.  It is reported that he made $1 million from this activity.  This came to the notice of John Wiley, who sued for copyright violation.  The court found that the “First Sale Doctrine” was held to apply for only the U.S. market.  Kirtsaeng was found guilty of willful copyright infringement and fined $600,000, and the case went to the Supreme Court which heard oral arguments last week.

What does the First Sale Doctrine mean?  Will libraries still be able to lend books printed overseas?  This is an example of an easy case making bad law.  Will the majority rule that once sold, copyright is exhausted everywhere in the world?

Here are the lyrics to Hannay’s song about this case: 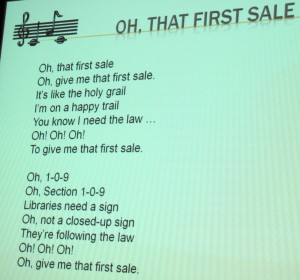 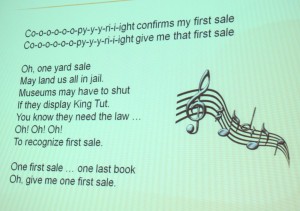 Finally, Hannay briefly discussed two other cases (and did not sing about them).

CUP sued Georgia State for copyright regarding postings on the school’s electronic reserve service.  The court ruled that all but 5 of 74 book chapters were protected by fair use.  The judge has deferred a decision.

Judge Chin rejected the proposed Google Books Settlement and denied Google’s motions to dismiss the claims of the Authors Guild but let the case go forward as a class action.  Google and the Association of American Publishers announced a settlement of their part of the suit in October 2012.  Details are confidential.  The court does not have to approve this.

The issues in Golan v. Holder go back to the 1800s and involve the performance of musical works from overseas being performed in the U.S.  In 1994 an agreement mandated the implementation of the Berne Convention articles, which included protection of those works, saying that copyright is extended to foreign works that are still protected in their country of origin.   This resulted in high permission fees for performances and affected orchestras that had been using those materials.  An appeal claimed that this caused an impenetrable barrier to performances and that nothing allows Congress to restore that copyright protection.  The Supreme Court rejected that appeal and found no barrier to removing materials from the public domain.  They also said that the creation of a new work is not the only way to spread knowledge; it may also happen with existing works.  Here is a dissenting opinion on this decision: 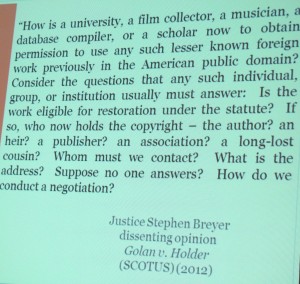 Withdrawal of so much information from the public domain is not furthering the dissemination of knowledge.

This case relates to the digitization of published works, including orphan works.  It was joined by the National Federation for the Blind (NFB) which said that digitization opens up a new world of knowledge for blind people. 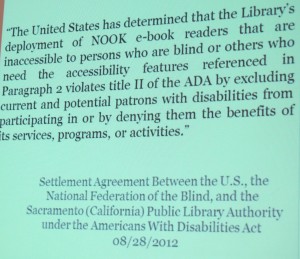 The universities doing the digitization claimed Fair  Use.  The issue is whether the use is for commercial purposes or education.  It also involves whether digitization is a transformative use which is allowed.  The judge held that it will not help the university avoid the purchase of more copies of books, so it was not commercial.  He also said that a copyright owner cannot prevent a transformative market and concluded his ruling with this statement: 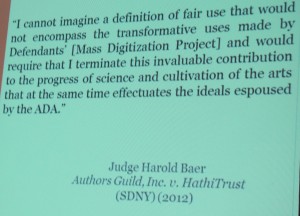 Much of this case related to people with disabilities, which is allowed by Fair Use.  Changing technology is placing more of a burden on libraries to accommodate people under the Americans with Disabilities  Act (ADA).