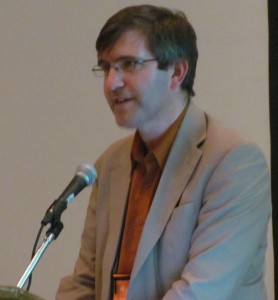 Charles Watkinson from  Purdue University, moderator, introduced this session by noting that Open Access (OA) books are the next frontier in publishing.  How different are they from journals?  We need to develop our positions, but there are few published studies.  The 3 studies presented here are therefore particularly important.  However, we must be careful not  to generalize too much from these studies because books are so varied. 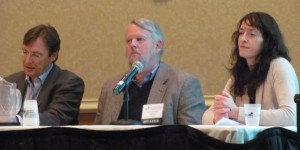 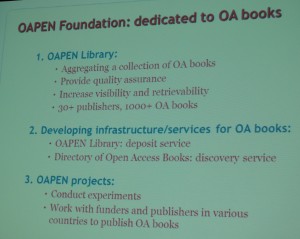 Can OA be an effective model for books?  Books are having a difficult time in the marketplace, so OA could have some significant impacts. It could improve discovery, usage, and impact.  It might reduce costs but may not impact sales.  Two projects are looking at these issues.  OAPEN-UK is managed by JISC, and OAPEN-NL is managed by the OAPEN Foundation. The UK project has 5 publishers, and the Netherlands project has 8.

OAPEN-NL is measuring the effect of OA on books using Google Books.  Books that are fully open had about 90 visits month. Discovery had 3 times the discovery and 8 times the usage.   Compared with a control group,      downloads were 6.5 times higher, showing that there is no indication that OA is harming sales, and a significant additional usage results.   Here are some preliminary results from the project: 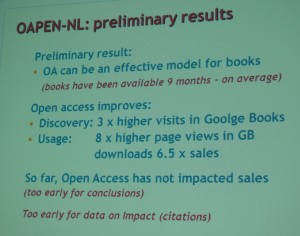 The conclusions that can be made are that OA does improve discovery and usage and does not impact sales (but in the future, it probably will have an impact).

In making a transition to OA monographs, we need to have agreement on what constitutes an OA book, shared infrastructure and services, and, most importantly, sustainable business models.  Here are some possible business models: 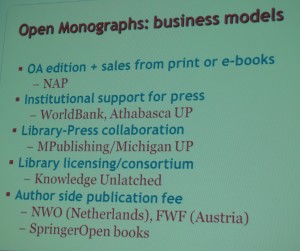 Richard Clement, Dean of Libraries at Utah State University, where the university press (part of the library) has put its backlist into the Hathi Trust, described  the effect that OA has on book sales.  The pattern is similar for all books:  sales are low and flat (except when a book is required for a course), but once OA is introduced, usage strongly increases.  International usage becomes significant.  The pattern for this book is typical (see graph at lower left). 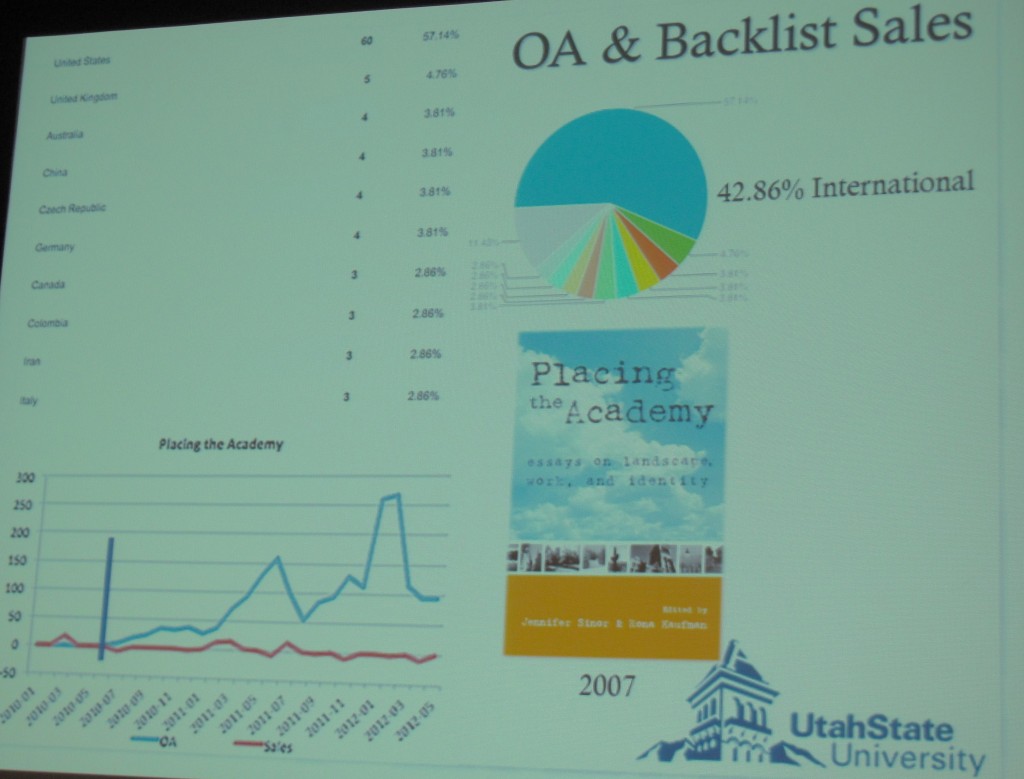 Here are tentative answers to the study questions. 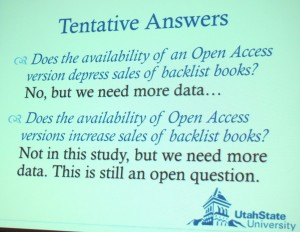 OA gives new life to dead backlist titles and significantly broadens the distribution of the books.  This is a new area, and some questions remain: 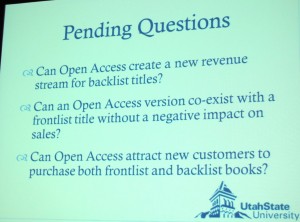 MPublishing is a new publishing organization that is part of the University of Michigan library.  Shana Kimball noted that MPublishing was created because a viable imprint for authors was needed.  The first project was Digital Culture Books in which books were published traditionally and as OA monographs.  So far, 27 titles have been published.  In every case, the books performed as well as expected, and some of them exceeded expectations.  An average of 750 sales/title were made, and the OA edition did not seem to impact the sales.

How do we measure value and impact?  Digital Culture Books has become a recognized imprint and is starting to attract authors–a positive impact.

The second project was a joint venture with Open Humanities Press–an imprint for digital theory books.  The first 5 books have published in 2 series.  Editorial and peer review operations are done by volunteers recruited by the press, presenting an opportunity to study distributed publishing.  The first book has sold over 500 copies.

These two models are modest attempts at repurposing the workflow and opening access for OA books.  Significant institutional support is vital at these early stages.  We also need to engage our peer publishers, librarians, and authors.