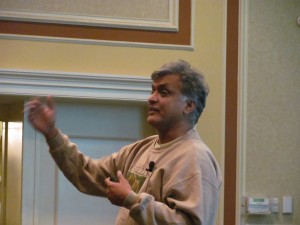 Anurag Acharya, Lead Engineer Google Scholar, set out to build something he would want to use himself, and 8 years later, it became Google Scholar. He took us on a fascinating tour of its ideas and development.

The overriding principle of Scholar’s development was that discovery must be universal.  Discovery is often equated with access, but that limits it to what the user or the library has available.  It is sometimes tied to areas, genres, or sources, but these have the same limitation.  Answers to questions are not limited to area; multidisciplinary work is common and increasing.  And “smartness” is not limited to the well funded (Acharya noted that he grew up watching people far smarter than he was).  Major problems can be solved if everyone can build on all discoveries.

Here are the goals that were set for Google Scholar. 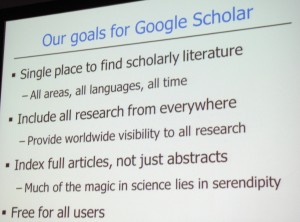 Not everything that is known about a piece of work is known by the person who did the work. Thus, all research from everywhere had to be included in the service. Scholar is now the largest scholarly search system in the world. Here is the general approach that was taken in its development. 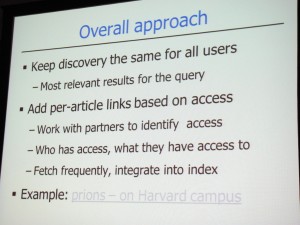 A very successful integration of link resolvers with Scholar was implemented, and now virtually all resolvers work with Scholar.  Over 4,000 libraries worldwide are participating.  Some libraries declined to participate, mainly smaller ones that have significant budgetary limitations or those that were not aware of the potential benefits.

Some publishers have launched initiatives to provide free access to their archives, which is a huge benefit to researchers and should be highlighted. Many publishers that are providing such access are not participating in the Google Scholar program because there is a logjam: publishers are waiting for the hosting platforms to support, and platforms are waiting for publishers to request access. Efforts are underway to solve these problems.  There has been much progress, but many challenges remain.