Does Format Matter? Usage of E-Books and P-Books

Does Format Matter? Usage of E-Books and P-Books

The e-book market is significantly expanding, but how is it affecting usage of printed book collections.  For example, when  the same book is available in both print and electronic form to the same audience, is there any difference in usage? When the University of Denver acquired the Duke University Press e-book package from Ebrary in 2008, Michael Levine-Clark was able to study this question. 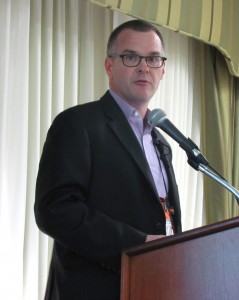 Normalization of usage data was difficult.  It is difficult to compare print and electronic book usage directly from circulation data.  Print books have potentially many uses per checkout, but e-books have one use per click.

Lack of data consistency makes matching records difficult. Books are discovered through catalog records, but matching circulation records on title is impossible. Vendors and catalogers do not necessarily agree on the title.  It turned out that using the 9 unique digits from the ISBN was a fruitful approach.  The initial 4 characters of the ISBN13 and final check digit from both ISBN10 and ISBN13 were stripped off to create an “ISBN9”.  The entire data normalization process using Microsoft Access was: 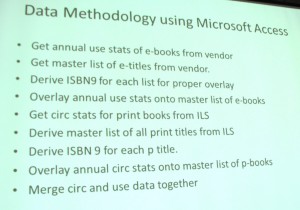 Data were analyzed using Excel.  Here are some conclusions on the normalization process: 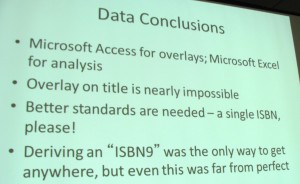 Reports from COUNTER and Ebrary were used to derive overall uses.  An average of 49.4 pages were viewed for each e-book.  Only 56 titles had pages printed from them.  1,435 print titles were used.   325 titles were used in both formats. 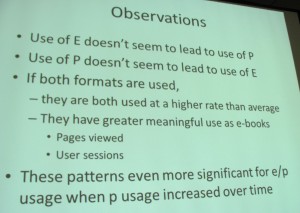 This study raises questions for further investigations: If dual format usage is higher by all measures, does this mean that people’s preference is for good content, not format?  Might there be differences in usage by subject or date?  How does discovery affect this?  Is it significant that most of the e-book usage was of books on the backlist?