ATG Book of the Week: The 2012 State of America's Libraries Report

ATG Book of the Week: The 2012 State of America's Libraries Report 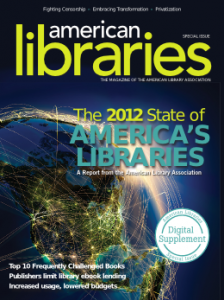 The 2012 State of America’s Libraries Report

This report was released by the American Library Association earlier this year.  It provides a year-in-review for America’s public, school, and academic libraries and can be read on the ALA website or as a pdf.

From the Introduction: “As the national economy continues to struggle toward recovery from the Great Recession, 2011 was a year of grim headlines. The federal Library of Congress lost about 9% of its budget and 10% of its workforce. Detroit, a city in fiscal crisis, agonized all year over how many library branches to close. In Chicago, Mayor Rahm Emanuel proposed a budget that would eliminate 268 currently vacant positions and lay off almost 300 from the library system. (After he was met by hundreds of protesters of all ages, including a group of fist-pumping preschoolers, the mayor backtracked…somewhat.) The Huffington Post took note of it all and started a series in November headlined “Libraries in Crisis.”

But there was good news as well. The Troy (Mich.) Public Library was saved from closing permanently after some 58% of voters, who had rejected two similar measures in the past few years, approved a five-year operating millage. In Los Angeles, voters in March approved by 63% a measure to increase dedicated spending for the Los Angeles Public Library system by $50 million over the next few years without raising taxes, allowing reinstated full-time hours for 73 branches.

And even some good humor emerged: The Gilpin County (Colo.) Public Library put up a roadside sign advertising “Free coffee, Internet, notary, phone, smiles, restrooms, and ideas” to all who entered….”

(Also available as a pdf at: 2012 State of America’s Libraries Report)