ATG Book of the Week: Rebooting the Academy

ATG Book of the Week: Rebooting the Academy 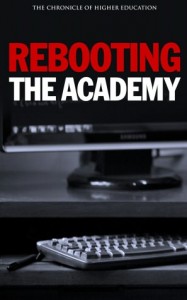 Rebooting the Academy: 12 Tech Innovators Who Are Transforming Campuses.

The Chronicle of Higher Education just “published … its first e-book: Rebooting the Academy: 12 Tech Innovators Who Are Transforming Campuses.  It’s an expanded version of a feature published earlier this year, which tells the stories of a dozen key figures who are changing research, teaching, and the management of colleges in this time of technological change. The e-book features essays by each of the 12 innovators, explaining their visions in their own words and providing more details on their projects, plus The Chronicle’s profiles of them.

Among the highlights: Salman Khan, founder of Khan Academy, riffs on how video lectures can improve teaching; Dan Cohen, of George Mason University’s Center for History and New Media, asks whether Google is good for the study of history; and Jim Groom, an instructional-technology specialist at the University of Mary Washington, argues against the very premise of the collection, noting that the best innovations come from groups, not individual leaders…